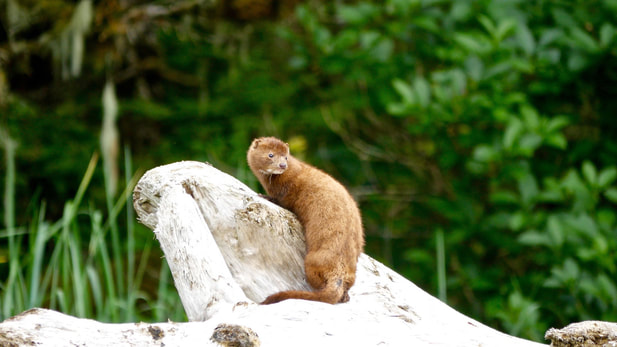 Identification
The American mink is a member of the weasel family, bearing a resemblance to ferrets, ermines, and weasels. It is a sleek and glossy mammal, with males reaching 70 cm long from head to tail and females to 60 cm. Its tail may be more than half the length of its body. It is usually dark brown to black, although fur colour may vary. Its underside is often paler, and it may have a white chin patch and other white spotting.

Habitat & Range
The mink is a semi-aquatic and nocturnal animal. It establishes its den and home range near wetlands and riparian zones like streams, lakes, bogs, and fens, with adequate cover provided by trees and shrubs. It also inhabits estuaries and beaches. The species is common across North America, with the exception of the southwestern United States. The American Mink was first introduced into Europe for fur farming in Britain. A series of accidental and deliberate releases has led to successful reproduction and proliferation in the wild, and the species is now found across the United Kingdom and many other parts of Europe.

Human Uses
Mink has long been prized for its thick, glossy fur, leading to domestication beginning in the 1800s. Mink fur farms are still viable economic enterprises, with the majority of mink farming taking place in Denmark and China, though the Netherlands, Poland, the United States, Canada, and Finland are significant players as well.

Intriguing Info
American minks are carnivorous, and those living on coastlines will eat a variety of seafood and fish, including crabs and mussels. It tends to kill more prey than it can eat, and will store the excess for later. The species is considered invasive in the United Kingdom, affecting many small mammals, seabirds, and fish upon which it preys; it also out-competes native predators, and can spread disease.