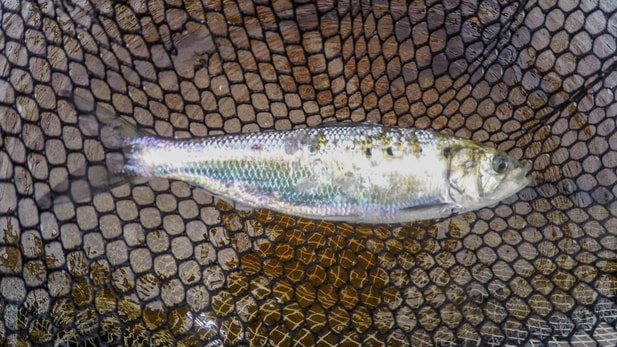 Photo by Midoli Bresch
Identification
This silvery fish, which belongs to the herring family (Family Clupeidae), has a deep and somewhat compressed body, with a blue or bluish-green iridescence on the back and a row of dark spots along the sides behind the gills. Key identifying features are its large scales, and the modified, enlarged, and saw-toothed scales (scutes) that form a ridge (keel) along the belly. It also has a deeply forked tail. It gets to 76 cm long, and weighs up to 5.5 kg.

Habitat & Range
The American shad is an anadromous species, and so is found in coastal waters during its migration to its freshwater spawning grounds from the pelagic waters of the open ocean where it spends most of the year. An introduced fish from the Atlantic Ocean, it has established populations in the Pacific from Baja California, Mexico to Alaska and Siberia. It is found in a number of major river systems in the Pacific Northwest.

Similar Species
The scutes forming a keel along the belly help to distinguish the American shad from the similar Pacific sardine (Sardinops sagax).

Human Uses
​This fish is caught commercially and recreationally in rivers, estuaries, and inshore waters when migrating to freshwater to spawn. It is also harvested for its roe.

Intriguing Info
Due to its value as a food fish on the east coast of the United States, the American shad was purposefully introduced to the Sacramento River in the 1870s and the Colombia River in the 1880s. Click here for some historical background to these introductions.