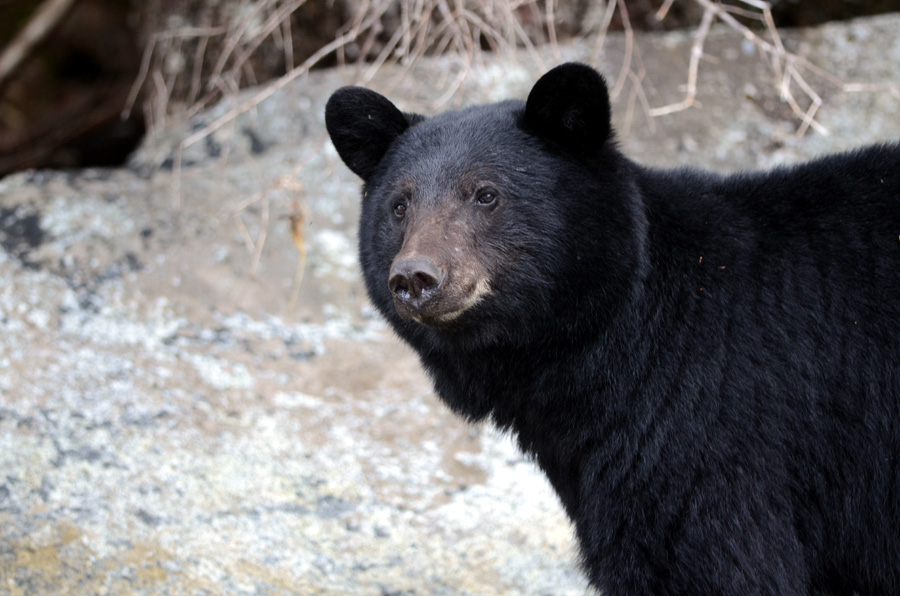 Top: mother black bear, photo by Chris Darimont (raincoast.org). Below left: kermode bear, or spirit bear, fishing for salmon. Photo by Sherry Kirkvold. Below right: black bear fishing for salmon. Photo by Brandon Harvey.
Identification
Black bears are relatively easy to identify, though not all live up to their common name. They range in colour, and can be black, brown, or blonde. In the case of the Kermode Bear, or "spirit bear" genetic lineage, some bears can even be cream-coloured or white. Black bears found in the west of the species' range more commonly have black fur, while those in the east tend to have lighter fur. Males range in size from 1.3 to 1.9 m long and can weigh up to 150 kg; females range from 1.2 to 1.6 m and weigh up to 120 kg. Black bears have prominent rounded ears, a large snout, and thick legs with large flat feet.
The taxonomy of black bear subspecies is currently uncertain. Some sources split BC's black bears into five distinct subspecies (the coastal Ursus americanus altifrontalis, U. a. carlottae on Haida Gwaii, the interior U. a. cinnamomum, the Kermode Bear U. a. kermodei, and U. a. vancouveri on Vancouver Island). However some recent studies group BC black bears into two distinct genetic lineages (coastal and continental) of one species instead of separate subspecies. Currently  See Klinkenberg (2012) for more information.

Habitat & Range
Black bears typically inhabit temperate and boreal forests, though they will forage in a variety of habitats including riparian areas, shorelines and intertidal zones, shrub-covered areas. Bears that become habituated to humans may also forage in and around human settlements. Black bears are highly adaptive, and can also be found in tundra, swamp, and dry scrub forest habitats in some parts of their range.
Black bears are found from the Arctic tree line to northern Mexico and from west coast to east coast. Historically they were present throughout all forests habitats; while they have been extirpated from much of their former range, recent years have seen an increase in both numbers and range in many parts of North America (IUCN 2008).

Similar Species
Grizzly bears also vary in colour from dark blonde to black, and so colour should not be the only identifying feature used to distinguish between the two species. Adult grizzlies are usually much bigger than adult black bears, but small or juvenile grizzlies may appear black bear-like. Grizzlies have a hump between the shoulder and smaller, less prominent ears than black bears, and also often have a ruff of longer neck hairs. The front claws are much longer on grizzlies as well - while this is not a feature you want to identify in person, it may help to identify tracks.

Human Uses
Black bears are a target for both trophy hunters and BC's ecotourism operations - two endeavours that are clearly at odds. The trophy hunt of bears brings up some obvious ethical issues as well as conservation concerns (see Conservation below). Some environmental organizations and First Nations groups are actively campaigning to end the trophy hunt in BC, which occurs for two months each spring and fall. In September 2012 the Kitasoo First Nation began banning the trophy hunt from their traditional territory, and continued the ban in 2013. This is a contentious issue, as the provincial government maintains that it has jurisdiction over the provincially-sanctioned hunt. The environmental organization Raincoast Conservation Foundation has dealt with this issue by buying hunting licenses to areas previously used by trophy hunting outfitters. As of summer 2013 the organization has purchased two hunting licenses that cover large areas of the Central and North Coasts, and are looking to buy land to the north and south of these areas.

• Read more about issues surrounding the trophy hunt on the Raincoast and Pacific Wild websites.
• Read about the ethics of the trophy hunt in the online book Faltering Light II (the preview shows the whole book), and in the following journal article:
Gunn, A.S. 2001. Environmental Ethics and trophy hunting. Ethics & the Environment 6: 68-95

Intriguing Info
Pacific salmon are an extremely important resource for coastal bears. Black bears consume a large amount of returning spawning salmon in the late summer and fall; once study found that black bears on Moresby Island, Haida Gwaii consumed an average of 13 salmon per day during the spawning season (Reimchen, 2000). This study found that a large majority (70-80%) of these salmon had either partially or fully spawned, indicating that black bear predation does not appear to greatly impact salmon population levels. They may influence salmon genetics, however, as predation on partially spawned salmon can lead to increased genetic variation within such salmon populations (Reimchen, 2000).
This bear-salmon interaction goes on to have further impacts on the surrounding ecosystem. Once bears catch a salmon they take their catch away from the stream, where the salmon is consumed and the remains are spread around the surrounding area by other scavengers. The nutrients from these salmon feed nearby plants as well as other animals and insects, and affect which plant species grow in the area. See Impacts of Salmon on Riparian Plant Diversity, Salmon for Protected Areas,  and Some ecological and evolutionary aspects of bear–salmon interactions in coastal British Columbia for further information.

A white morph of the kermodei subspecies of black bear exists on BC's Central Coast, and is called the Kermode bear or spirit bear. The white fur is a recessive trait; it occurs in 10-25% of black bears on a handful of islands along the Central Coast, and occurs at the highest frequency on Princess Royal and Gribbel Islands. Where this white-phase bear is found, white and black morphs coexist. While the exact ecological basis for this trait is unknown, some evidence suggests that the persistence of the white morph in certain areas may be due to a selective advantage gained by having white fur while hunting salmon in daylight. See Klinka and Reimchen (2009) and National Geographic's 2011 Spirit Bear article for more information.

Conservation: While black bear populations are doing relatively well in BC, habitat loss and fragmentation, trophy hunting, loss of salmon stocks, and the negative effects of bear-human interactions (e.g. habitation to humans) are still issues of concern for this species. A major issue of concern in BC is the fate of spirit bears on BC's Central Coast. Hunting spirit bears is illegal, yet the same protection is not given to the rest of that region's black bears, despite some of them carrying the gene required for the white morph. Some habitat protection was created through the formation of the Great Bear Rainforest, but there is some criticism from scientific community and environmental groups regarding the adequacy of current protective measures.