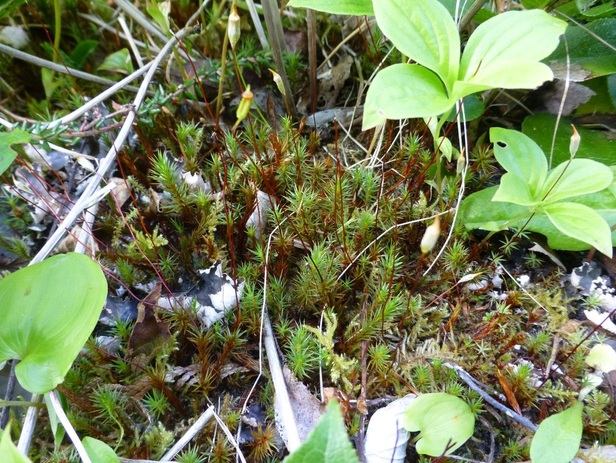 Identification
Juniper haircap moss is bluish-green, shiny, and occurs in dense mats to 10 cm tall. The most useful distinguishing feature of Polytrichum juniperinum is red tapering hair points of the leaves which become horizontal with wear and age. Species of Polytrichum have distinct lamellae on their leaves, which are dark-green ridges running lengthwise along the leaf midrib. A clear leaf blade overlaps the lower part of the lamellae giving the leaves their distinct powdery blueish-green colour. Click here for photos and more detailed information about these structures.
Sporophytes are common, upright, wiry, reddish capsules, four angled, and covered with long hairs.

Habitat & Range
Very common (almost considered a weed) on disturbed sterile or mineral rich soils. It can be found along roadsides, in the forest, and along rocky ledges at sea to alpine elevations. Juniper haircap moss occurs throughout the world, although is more common in temperate and cold climates and excluding tropical and desert regions. It is common after fires along with green-tongue liverwort (Marchantia polymorpha).

Similar Species
Many species in the Polytrichum genus have exposed lamellae. The most similar is awned haircap moss (Polytrichum piliferum), which can be differentiated from juniper haircap moss by its much longer white hair points.

Interesting Info
For a more in depth look (with photos) at Polytrichum juniperinum refer to the UBC Bryophyte course species page.

Authors and editors of page
Paige Whitehead and Brian Starzomski (2014).