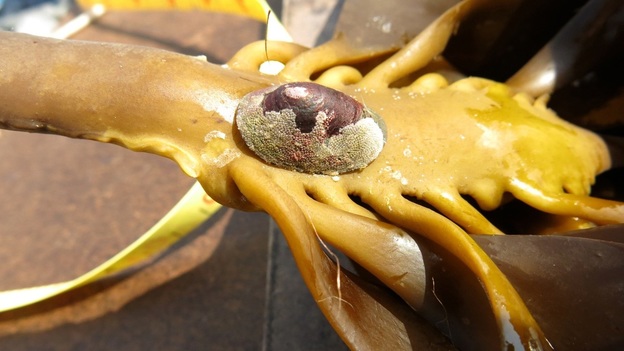 Lottia instabilis on the stipe of Pterygophora californica. Photo by Jenn Burt
Identification
This species is relatively easy to identify due to its unique shell shape. The shell is more elongated and oval in shape than other Central Coast limpets, and the anterior and posterior ends are curved upwards so that the animal is unstable and tippy on a flat surface. This may seem like a disadvantage for a species that needs to cling tightly to substrates during periods of high wave action or other disturbances. However, this unique shell shape is perfect for clinging to kelp stipes and holdfasts –this species' habitat and food source. The apex of the shell is slightly anterior to the center, the exterior is typically dark brown in colour, and often lighter at the apex. If you happen to come across an empty shell, the interior has a characteristic brown blotch in the center of the shell, while the rest is blueish-white. The shell can be up to 35 mm in length.

Similar Species
Another species of limpet that you may encounter living on kelps is Lottia pelta, which is similar in shape to L. instabilis, but has very distinct ribs on the exterior of the shell.

Habitat and Range
This species inhabits kelp stipes and holdfasts, particularly kelp species such as Laminaria setchellii and Pterygophora californica. It attaches snugly to kelps that grow in the intertidal zone, and is found to depths of 73 m from Kodiak Island, Alaska to southern California.

Intriguing Information
Take a close look at the kelp stipes on which you may find this species. You may see shallow “scars” where unstable limpets were clinging.

Authors and editors of page
​Beatrice Proudfoot and Kelly Fretwell (2015)