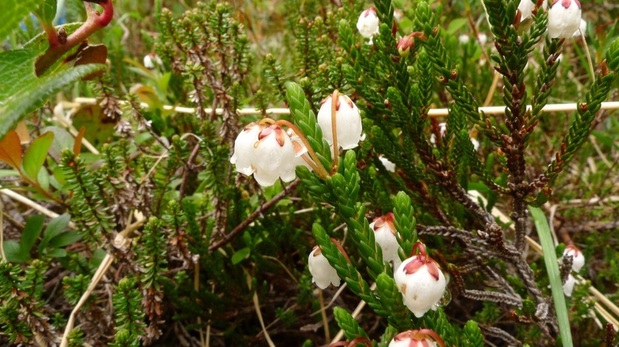 White mountain-heather on Mt. Buxton, Calvert Island. Note the difference in the leaves compared to the plant on the left: white-mountain heather leaves are scale like, whereas the ones on the left are spreading and needle-like. Photo by Abe Lloyd.
Identification
White mountain-heather is the most identifiable of the four mountain-heather species that often grow together in BC. Its scale-like leaves have an opposite arrangement along the stem, and its small white flowers are bell-shaped when fully open. This low-lying shrub has stems to 30 cm tall, and often forms large mats.

Habitat & Range
As its name suggests, white mountain-heather is found in open habitats in alpine and subalpine environments. Its range extends along the Pacific coast from Alaska to California, and inland across BC, western Alberta, Washington, Oregon, and Montana.

Human Uses
White mountain-heather can be used to produce a golden-brown dye. It has also been used by the Nlaka'pamux (Thompson) First Nations to treat tuberculosis.

Intriguing Info
White mountain-heather is a very slow-growing species: plants of this small shrub may be up to 20 years old.