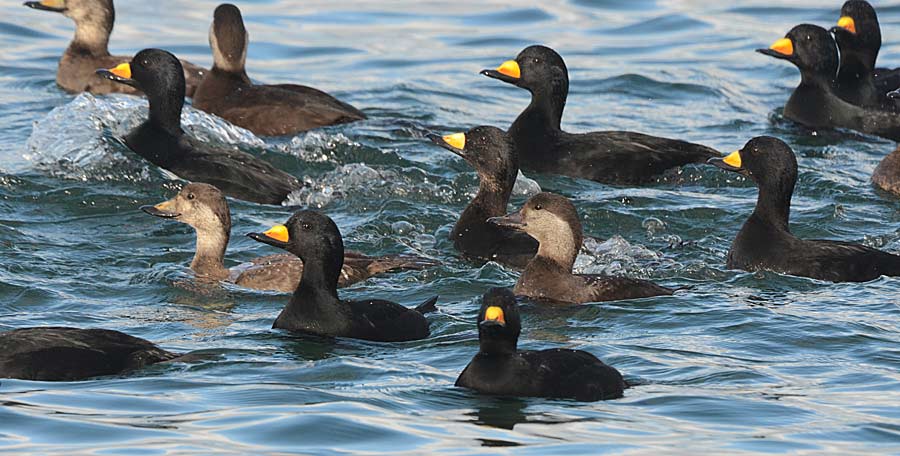 Female and male (yellow knob on bill) black scoters. Photo by Mike Yip.
Identification
The male black scoter has glossy black plumage and a distinctive orange and yellow knob at the base of its upper bill, while the female is a dark brownish-grey, with a pale face contrasting against a dark cap. The base of the female's upper bill may be slightly swollen and yellow, but not obviously so. While neither has white wing patches, the feathers at the edge are paler than the rest of the wing; this contrast is more evident in the male than the female.

Habitat & Range
In winter this sea duck can be found in large flocks along exposed coastlines and in bays from the Aleutian Islands and southern Alaska south to California, as well as the east coast of North America. While at sea it sticks to fairly shallow, nearshore waters, often over rocky bottoms. In summer it breeds in coastal tundra in Alaska, Hudson Bay, and eastern Canada.
​
Similar Species
The male surf scoter (Melanitta perspicillata) and white-winged scoter (Melanitta fusca) have similar beaks, but both have white head or face patches. The brownish surf and white-winged scoter females have whitish head or face patches, instead of the pale face and contrasting dark cap of the female black scoter. The wings of the surf scoter are more uniform in colour, while the white-winged scoter has white wing patches. Both the surf scoter and the white-winged scoter are more commonly sighted.

Intriguing Info
This species is thought to be declining in population size. The sizable flocks it forms in winter and during moulting make the species vulnerable to sudden losses of large numbers from threats such as oil spills or chronic pollution from oil and other sources. Due to this vulnerability it is blue-listed in British Columbia, meaning it is a species of special concern.