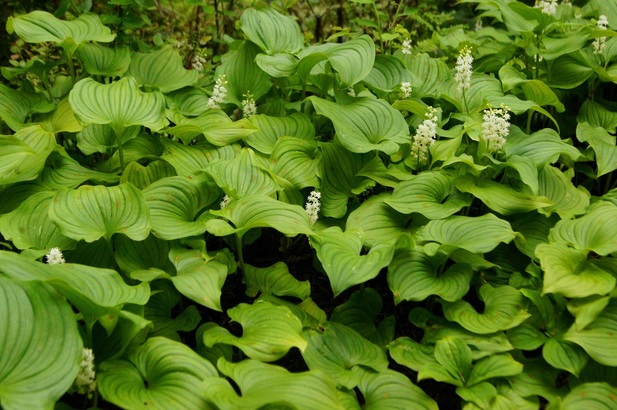 Photos by Katie Davidson (top), Chanda Brietzke (bottom right) and Kelly Fretwell.
Identification
The shiny heart- to arrow-shaped leaves of false lily-of-the-valley carpets areas of the forest floor in the spring and early summer. The pointed, visibly-veined leaves extend into lobes around the stalk and reach 10 cm long. These leaves grow on stalks from the stem, numbering 1-3 per stem. Small white flowers grow in clusters at the top of each stem, forming a cylinder of flowers. The small, spherical berries produced by this plant are initially green spotted with brownish-red, and ripening to red.  False lily-of-the-valley grows to 40 cm tall.
​
Habitat & Range
False lily-of-the-valley is often found in the understory of moist to wet, and usually shady, forests on the coast; it is sometimes the dominant ground cover species, especially in coastal Sitka spruce forests. It is also found along stream and riverbanks. It grows from low to middle elevations, and is predominantly found along the west coast of North America from Alaska to California, and extending somewhat inland within BC, Washington State, Oregon, and Idaho.

Human Uses
The small red berries were eaten by many of the Indigenous Peoples of the Pacific Northwest, including the Squamish, Kwakwaka'wakw, Nuxalk, and Haida. They were not, however, a sought after or highly-regarded food.
The more prominent traditional uses of the plant were medicinal: leaves were put on cuts (Haida, Ohiet), pounded roots (Quinault) or leaves (Squamish) could be rubbed on sore eyes, and the juice or infusions of the roots were drunk to heal internal injuries (Cowichan) or, specifically, to reverse sterility (Makah). Click here for further information on traditional uses for this plant.