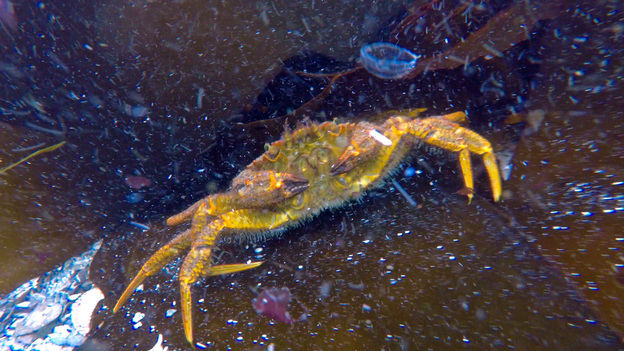 Helmet crabs photographed by Tristan Blaine (top), Nathaniel Glickman (bottom left), and Alanah Nasadyk (bottom middle). Bottom right photo, by Kelly Fretwell, shows a helmet crab carapace. Note the stiff setae and six teeth cutting into the edge of the carapace below the right eye.
Identification
The helmet crab is covered in stiff club-shaped hairs (setae), and is usually a yellow-green colour with red, brown, or orange patches. The carapace margin is lined with red, brown, or orange as well - this colour accentuates the six large teeth that cut into both sides of the carapace. This is particularly visible in the left-hand photo above. The carapace reaches 10 cm across. This crab doesn't have a rostrum; instead there are four small teeth between its eyes.

Habitat & Range
This crab buries itself in sediment and hides in eelgrass or kelp beds. It is mostly subtidal, though it is found in intertidal and subtidal zones to a depth of 110 m. It is most often found in soft-bottomed habitats, and occasionally may occur in rocky-bottomed areas. Its coastal North America range stretches from the Bering Sea to Monterey, California, and is most common north of Oregon. It is also found in coastal areas of Siberia, Japan, and Korea.

Intriguing Info
The helmet crab can be difficult to pick out among kelp, eelgrass, and sediment due to its camouflaging colours. It is one of the fastest-moving crabs found along the BC coast.