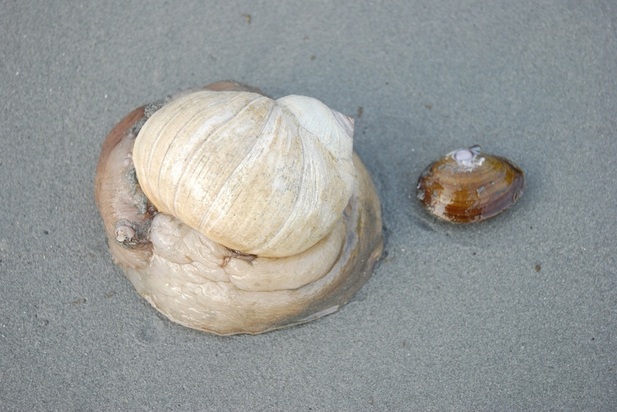 Top: this moonsnail was found in the process of drilling a hole into a bivalve (the hole is visible at the top of the shell). Photo by Kelly Fretwell. Bottom left: a round hole with a bevelled edge drilled into a shell is the mark of a moonsnail attack. Photo by Kelsey Collins. Middle: when the animal is fully retracted into its shell the aperture  is covered by a hard shield (operculum). Photo by Sarein Basi-Primeau. Right: moonsnail egg casings look like curved sheets of sand packed together ("sand collars"), and can often be found in the shallow waters of sandy beaches. Photo by Kelly Fretwell.
Identification
Lewis' moonsnail is by far the largest and the most common moonsnail species found on the BC Central Coast. Its shell, measuring up to 14 cm across, has a distinctive globular shape, and is a creamy-white colour on the outside with a brown interior. A brown operculum covers the wide aperture. The animal's body is a soft, smooth, transparent tan or brown-grey colour. When out of the shell, the body can spread out to cover a large area, including most of the shell.

Habitat & Range
Lewis's moonsnail is most commonly found in in silty and sandy intertidal and subtidal areas, to a depth of 50 m. It often burrows into the sand for protection or to pursue prey. This species ranges along the coast of North America from southern Alaska to southern California, and is also found off the coast of Japan.