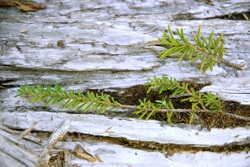 A comparison of mountain hemlock (top) and western hemlock needles (bottom). Photo by Kelly Fretwell.
Identification
Mountain hemlock is a coniferous tree that can grow up to 40 m tall, but is often stunted by elevation or soil conditions in certain habitats. The leader (top) of the tree droops slightly, but not as much as the top of the western hemlock (Tsuga heterophylla). The bark is thick and furrowed, and purplish to reddish-brown. The needles grow from all angles around each branch, forming a circular arrangement in cross-section. They are also all the same length. This species has two types of cones: pollen cones which are blueish, and seed cones that are purplish-brown. The cones are 3-8 cm long.

Habitat & Range
Mountain hemlock grows in bogs and other wet sites. In the southern part of its range it is generally found at subalpine to alpine elevations, but in more northern areas, including the Central Coast, it is often found at lower elevations. Its range extends north to Alaska, south to California, and inland to Idaho and Montana and parts of interior British Columbia.

Human Uses
Mountain hemlock is used as an ornamental plant in North American and Europe. It is tolerant of severe weather, but grows slowly at low elevations.