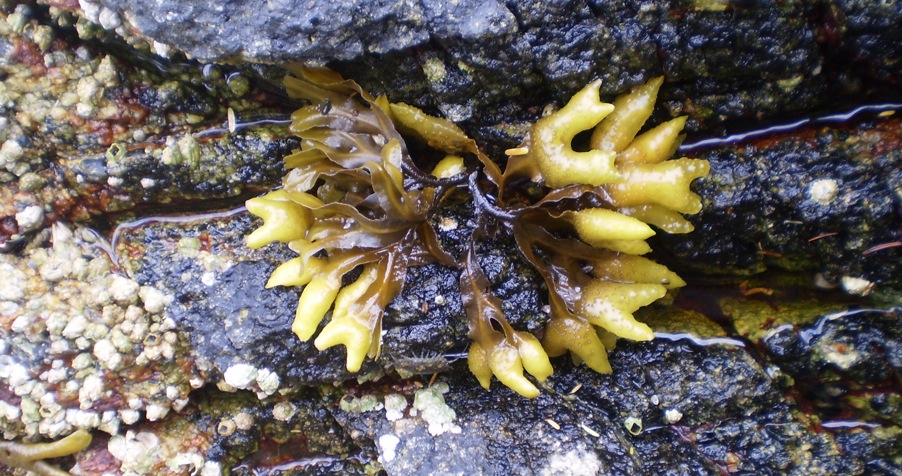 Rockweed growing on rocks in the intertidal zone and washed up on shore. Photos by Alanah Nasadyk (top), Claire Mackenzie (closeup), and Arden Mathieson.
Identification
This abundant and common brown seaweed has an olive green to yellow-brown thallus, composed of flattened, strap like blades with midribs and dichotomous branching. On mature rockweed, the terminal branches swell to form forked air bladders that have a bumpy, warty texture.  This seaweed attaches to substrates with a disc-shaped holdfast. It can grow to 25 cm long, with individuals in protected areas often reaching larger sizes than those on exposed sites.

Habitat and Range
Often a dominant species, rockweed is found in the high to low intertidal of sheltered to semi-exposed shorelines. It can tolerate habitats with low salinity, such as estuaries, as well as freezing temperatures. Its range extends from the Arctic Ocean, Bearing Sea, and Aleutian Islands to central California, and also includes the coastlines of Russia and Japan.

Similar Species
The smaller dwarf rockweed (Pelvetiopsis limitata) lacks midribs. There are other species with the common name of rockweed, but these species do not look similar to F. distichus.

Human Uses
Rockweed is edible — particularly the young tips in spring, when they are bright yellow. They can be chopped, dried, and powdered to add to teas.

Intriguing Information
Rockweed forms a short canopy that protects algae and invertebrates from wave action and desiccation during low tide. Periwinkle snails and false limpets eat rockweed. Avoid walking on this seaweed as it can be very slippery.
​
Colvert et al. (2014) studied the effects of increasing temperature on the ability of rockweed to photosynthesize. Their results suggest that as seawater temperatures increase (up to +4°C above ambient) rockweed will undergo a net increase in photosynthesis.

* A note on scientific names: Fucus gardneri and F. distichus, once thought to be distinct species, now appear to be the same species (or subspecies of the same species). F. distichus was thought to be the common Atlantic species whlie F. gardneri was applied to the common Pacific species; now they are usually used as synonyms, though F. distichus is preferred. Despite being very similar genetically, some researchers say that their distinct habitat preferences are an argument for keeping F. gardneri for the common Pacific Fucus.