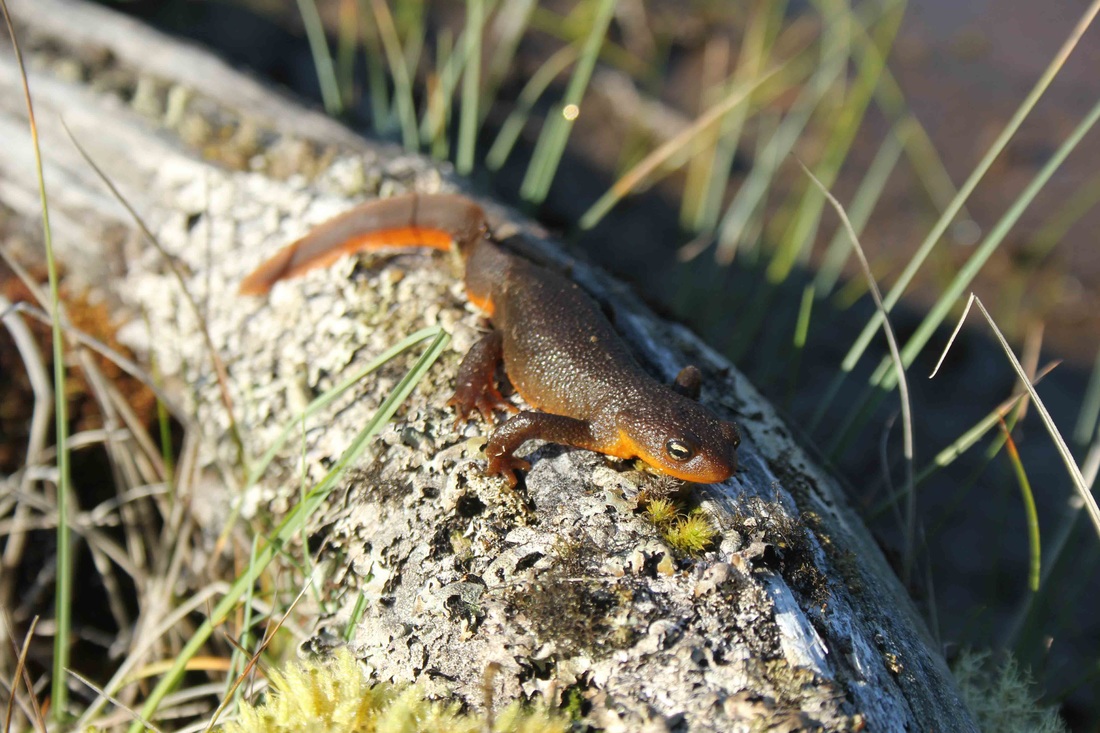 Above and below: roughskin newts in a bog. Photos by Ian Thomas.
Habitat & Range
The roughskin newt can be found in and around ponds, lakes, streams, and other wetlands while breeding in the spring. Some adults continue to live in wetlands through the summer or all year, while others migrate back to forested habitats — mostly older, mixed forests. There they can be found in and under decomposing logs and leaf litter, and in burrows formed by other animals. Unlike other salamanders, this species is active during the day as well as at night. It also is more active in wet weather. In winter the roughskin newt becomes inactive and hunkers down in moist, dark locations that do not freeze, such as under logs and underground.

This common amphibian can be found from sea level to 2700 m elevation, with a coastal range extending from southeastern Alaska to Santa Cruz county, California. There are also a few records from parts of the southern Rocky Mountains, though these populations may be from introductions of this species.

Intriguing Info
The roughskin newt's vivid underside is displayed as a warning to potential predators when the animal is disturbed. This defensive pose consists of curving both its neck and tail up, to show off as much of the orange colouring as possible. The warning is not unwarranted: the roughskin newt's skin secretes tetrodotoxin, a neurotoxin that is most potent when consumed by predators but can also irritate human skin if touched. This toxin, which is also found in pufferfish alongside numerous other animals, is strong enough to kill predators that do not heed the newt's warning colouration. The common garter snake appears to be an exception, making it one of the newt's few predators.

The roughskin newt preys upon insects, slugs, worms, and other organisms — including amphibian eggs and larvae, even ones of its own species. The egg-laying technique of scattering individual eggs around a breeding habitat may help prevent breeding newts from eating all the newly-laid eggs.