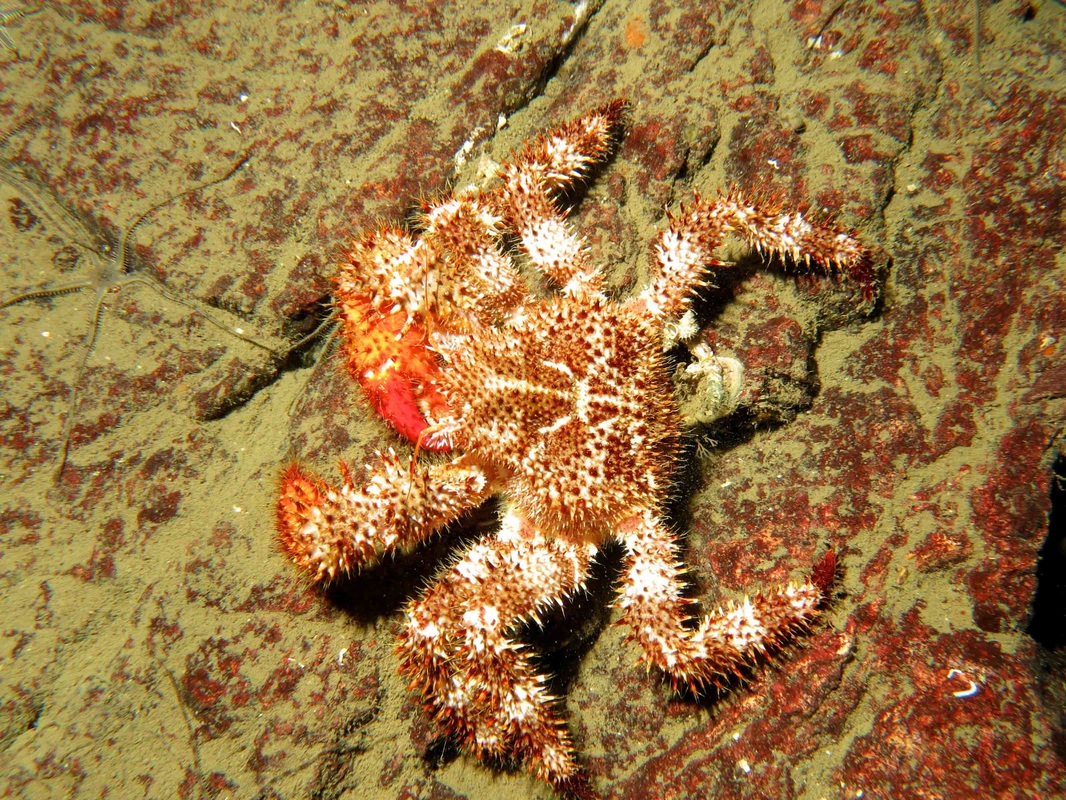 Photo by Jenn Burt
Identification
Like all members of Family Lithodidae, the spiny lithode crab has three pairs of normal walking legs; the fourth pair is reduced. The carapace, legs, and claws of this crab are covered in sharp spines of varying sizes. These spines are tipped with hairs, giving the crab a somewhat furry as well as prickly appearance. It has bright reddish-orange claw tips with white teeth. The rest of its colouring is brown, red, and white. The spiny lithode crab's heart- or pear-shaped carapace can get to 7.5 cm wide. Its abdomen is soft and not held tightly against the rest of its body.

Habitat & Range
The spiny lithode crab inhabits sandy, muddy, and rocky locations in the intertidal and subtidal to 245 m deep. It is most commonly found on vertical rock faces, and in the southern extent of its range it is more commonly found in deep water. Its range extends from northern Alaska to central California.

Similar Species
​Other similarly spiny and/or hairy crabs with soft abdomens include the hairy crab (Hapalogaster mertensii) and the granular claw crab (Oedignathus inermis). The latter is covered in granules and smaller, blunter spines without hair tips, and its right claw is much larger than its left. The former is much more similar to the spiny lithode crab, with both spines and setae (hairs) covering its carapace and legs. It may also have reddish-orange claw tips with white teeth. The spiny lithode crab can be differentiated from this similar species by the presence of spines on its rostrum, which the hairy crab lacks. H. grebnitzkii is another similar species, with northern BC at the southern extent of its range. It looks like the hairy crab and the spiny lithode crab, but its claws are tipped with blueish-black and its smooth (not spiny) rostrum is triangular in shape.

Intriguing Info
Some sources describe this species as a predator of shimp due to its occasional presence inside prawn traps; Jensen contends that because it is a slow-moving species it is unlikely to naturally prey on such fast--moving animals as shrimp. He suggests that crabs found in prawn traps are simply sampling the easy meal provided by the enclosed space.