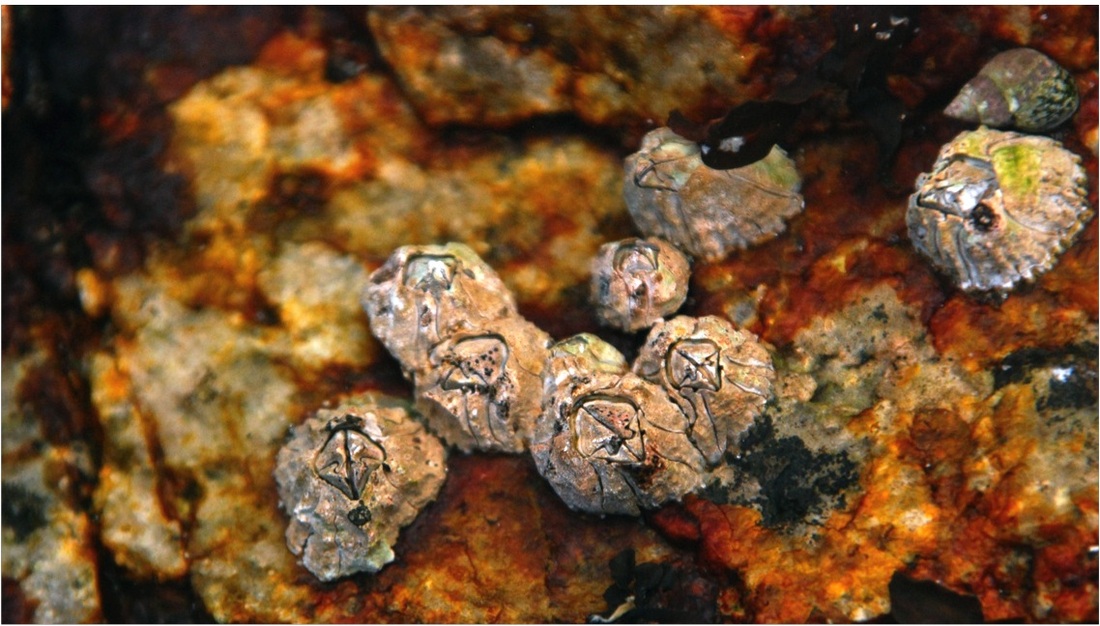 Top: uncrowded acorn barnacle, photographed by Joel White. Bottom: this barnacle, as with others, takes on a tall, thin shape when growing in crowded conditions. Photos by Kelly Fretwell (left) and Sienna Hamilton.
Identification
This small barnacle species is very adaptable. When not crowded for space it is volcano-shaped with a similar height and width. When crowded it takes on a tall and thin shape. It can grow to 2 cm tall. Most of the barnacle is white or greyish-white. The inside surfaces of the inner plates are black; as a result the visible edges of these plates are lined in black. The inner plates close tightly. The outer walls may have longitudinal ribbing (as in the bottom left photo), though this often is eroded in older individuals. See the Invertebrates of the Salish Sea species page for more in-depth identification details.

Habitat & Range
This is the most common intertidal barnacle. It can be found growing on hard surfaces like rocks, docks, and pilings along all but the most directly wave-exposed and open shorelines. Its range stretches from the Aleutian Islands to Mexico, and it is fairly ubiquitous in suitable habitats.

Similar Species
The small acorn barnacle (Chthamalus dalli) only gets to 0.8 cm in diameter, and is found mostly in splash zones where it gets wet infrequently. Its brown-grey colour also distinguishes it from the acorn barnacle.

Intriguing Info
The acorn barnacle can reach densities of 70,000 per square metre. It gets oxygen from air as well as water. Predators include the barnacle nudibranch (Onchidoris bilamellata), the ochre star (Pisaster ochraceus) and the sunflower star (Pycnopodia helianthoides). Charles Darwin first described this species.