Species at risk are species that are endangered, threatened, extirpated, or of special concern. A description of the provincial and federal species at risk lists can be found below, followed by a list of select species at risk found in BC with information on their listing status and level of protection.

BC Listing
Species that are endangered, threatened, or of concern in BC are classified by the province as red-listed or blue-listed. Red List species are or have populations that are endangered, threatened, or extirpated. Blue List species are of special concern because they have biological or life-history characteristics that make them particularly vulnerable to natural or human-caused disturbance. Species that are are recovering from being threatened or endangered may be blue-listed. Go to the BC Species and Ecosystems Explorer to search these lists.

COSEWIC and SARA
Species may also be listed by the Committee on the Status of Endangered Wildlife in Canada (COSEWIC), though a provincial listing does not necessarily lead to a federal listing. Species listed as endangered, threatened, or of concern by COSEWIC are then recommended for protection under the federal Species At Risk Act (SARA).

Legal Protection
Note that only a listing of endangered, threatened, or of special concern by SARA results in legal protection for the species. COSWIC listings are not a form of legal protection, and do not necessarily translate into protection under SARA. Listing under the provincial system is not currently a form of legal protection either, as BC is one only two Canadian provinces without a separate, stand-alone provincial endangered species law (the other is Alberta). In 2017 the BC government committed itself to creating an endangered species law; this is now in development. BC wildlife does have some protection under other legislation; click here for more information.

The level of protection gained by a successful SARA listing is the subject of scrutiny by some scientists and environmental advocacy groups, and the strength of existing protection may be subject to changes based on politics. Read more about this and about contentious species listings in the following publications:
Provincial ​Federal

Below you will find some Central Coast species that are classified as endangered, threatened, or of special concern by any of the BC, COSEWIC, or SARA lists. Species that have been proposed for one or more of these lists may also be included, as the listing process can be lengthy or controversial. Species with large ranges that include the Central Coast region may be listed here as well (eg. Pacific salmon populations). Only a select few species are listed here, as BC is home to more than 1900 plant and animal species at risk.
Report wildlife sightings and incidents - If you spot a species you know to be particularly at-risk or under-studied, please report this information to an authority such as Fisheries and Oceans Canada (DFO), the BC Cetacean Sightings Network, or the Coastal Guardian Watchmen for the purposes of data collection. It is especially important to report an animal in distress. You can also contribute your observations to iNaturalist, a global citizen science tool!

Multiple Chinook populations are listed by COSEWIC as special concern, threatened, and endangered​; search the COSEWIC database for the full list. As of 2019 none of these populations are listed/protected under the Species At Risk Act. The key reasons for population decline and continuing threats vary between populations, but may include impacts from dams on migration routes, historical overfishing, decline in quality of marine and freshwater habitats, continued commercial and recreation harvests, and pollution from resource development.

This coho population is listed by COSEWIC as threatened. It is not yet protected under the Species At Risk Act (as of 2019).

This nationally significant population has experienced reductions in numbers of more than 60% as a result of habitat degradation and overfishing. The population has experienced decreased survival in the marine stage of its lifecycle. Threats in its freshwater habitat include invasive species, increased water temperatures and drought, and impacts from land use and urbanization. Read more about the threats to the Interior Fraser coho population in the 2016 COSEWIC Assessment and Status Report. 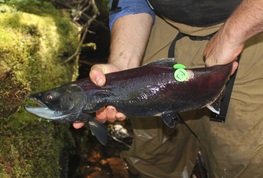 Multiple sockeye populations are listed by COSEWIC as special concern, threatened, and endangered​; search the COSEWIC database for the full list. As of 2019 none of these populations are listed/protected under the Species At Risk Act. The key reasons for population declines and continuing threats vary between populations, but may include habitat loss and degradation, overfishing, industrial pollution, and warming temperatures in freshwater habitats.
Authors and editors of page
Kelly Fretwell and Brian Starzomski (2013).