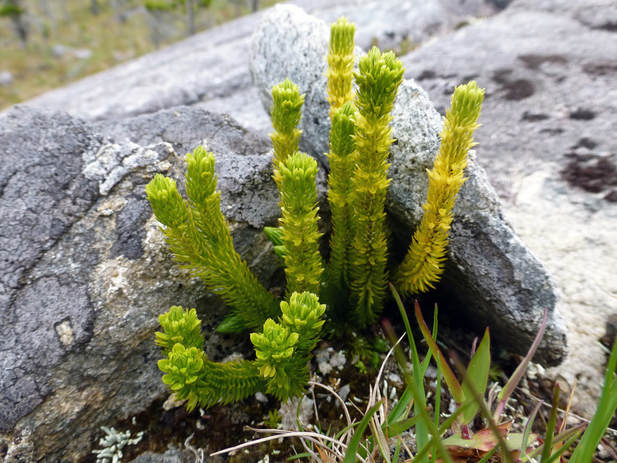 Alpine firmoss growing in rocky areas of bog habitat on Calvert and Hecate Islands. This species was previously identified in this region as H. haleakalae (prior to the split described below) and as H. selago, which is often incorrectly used for multiple firmoss species. Photos by Ian Cruickshank (top) and Kelly Fretwell
Identification
Clubmosses are vascular plants that reproduce by spores (like mosses and lichens) rather than seeds (like most other vascular plants). Ferns and horsetails share these characteristics. Alpine fir-moss has upright stems that grow from a horizontal rooting system. The stems may be unbranched or branch in two several times, grow 8-20 cm in height, and may appear singly or in clusters. It is yellow-green to orange-brown, glossy, and has crowded, scale-like leaves that are narrow and pointy-tipped. Leaves may be held fairly tight against the stem or may spread out away from the stem. Buds of new vegetative growth (gemmae) can form all along the length of the stem, as seen here and in the top photo above.

Habitat & Range
This species was relatively recently described (see "similar species" note below); so far it is most commonly found in meadows and rocky slopes at alpine and subalpine elevations, however it is also recorded in tundra and lower elevations. The specimens pictured here were found in rocky bog habitats at lower elevations. Alpine fir-moss ranges across northern and northwestern North America, Greenland, northeastern Asia, and northwestern Europe.

Similar Species
There are a few other similar clubmosses found in the Pacific Northwest which could be confused with alpine fir clubmoss. H. selago (formerly Lycopodium selago), which H. continentalis has often been confused with or misidentified as, is dark green and bears new growth buds just in whorls at branch ends. Western fir clubmoss (H. occidentalis) and Pacific fir-moss (H. miyoshiana or H. chinensis) are mostly found in conifer forests, and gemmae (buds) only grow in near-circular structures (pseudowhorls) at the end or top half of the stem. There are also differences in leaf size and shape; see Testo, Haines, & Gilman (2016) for further details.

H. continentalis was recently differentiated from H. haleakalae, so now the latter is only known from Hawaii (and is likely extinct). Both, along with the other similar species, have been previously grouped together with or misidentified as Huperzia selago (formerly Lycopodium selago).

Human Uses
Clubmosses are used in traditional Chinese medicine to treat acetylcholine deficiencies. Fir clubmoss specifically has anecdotally been linked to treatment of glaucoma, which is related to acetylcholine deficiency. The plant contains huperzine, a form of which (huperzine A) is used in the treatment of Alzheimer's symptoms. Fir clubmoss was once harvested for huperzine, though now the chemical can now be produced in a lab.

Intriguing Info
Clubmoss spore powder is very flammable, and once was used in fireworks, lighting stages, and flash photography.