Beach pea • Lathyrus japonicus
{Lathyrus is from thouros = 'something exciting'} 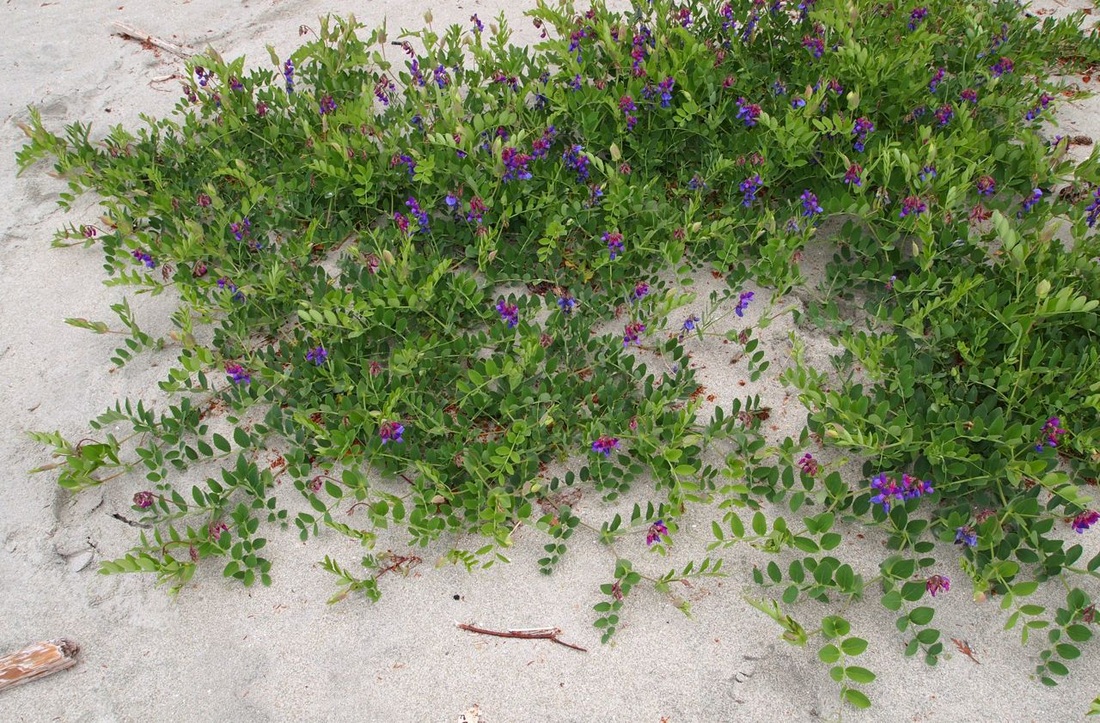 Identification
Beach pea is a trailing plant that can grow up to 1.5 m long. The leaves are light green and oval-shaped, with slightly pointed tips. At the end of each stem of leaves (actually leaflets of one leaf) there are generally curling tendrils. The flowers are reddish-purple to blue and usually grow in groups of 2-8 and range from 2 to 7 cm long. Beach pea produces hairy pea pods 3-7 cm long and 1 cm wide.

Habitat & Range
Beach pea is a coastal plant, found on sandy beaches, dunes, and upper gravel beaches amongst driftwood.
Its range extends along BC's entire coastline, north to Alaska and south to northern California. It is also found eastwards, both inland and on the east coast of North America from Newfoundland and Labrador south to New Jersey.

Similar Species
Giant vetch (Vicia nigricans) can be confused for beach pea, as it is a purple flowering plant that may be found on beaches as well. The flowers of giant vetch are narrower, and the leaves (leaflets) are generally longer and there are more on each stem: 18-26 versus 6-12 on beach pea stems. Grey beach peavine (Lathyrus littoralis) is also similar to beach pea, but is grey-hairy and does not have tendrils. Its range is restricted to southern Vancouver Island and northern Haida Gwaii. Marsh peavine (Lathyrus palustris) is less common, and is usually found in marshes and mudflats.

Human Uses
The seeds of beach pea were eaten by the Dena-ina, either raw or boiled and preserved in seal oil. The seed pods turn black when ripe, earning beach pea and the similar giant vetch the name 'Raven's canoe' from the Haida.