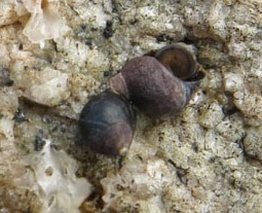 Photo by Jenn Burt
Identification
The black periwinkle typically has a fine, lightly coloured marbling pattern on its dark black-brown shell. The shell gets to 19 mm in length, and usually has fine spiral grooves.

Similar Species
Littorina plena and L. scutulata are the two most difficult Central Coast periwinkles to distinguish. Differentiating these species in the field is not easy, given that shell patterning and colouration for both species is so variable. As adults, L. scutulata individuals are larger than L. plena. If individuals are similar in size, L. plena can be identified by the presence of an ivory band at the base of the aperture (arrow in inset of this photo). If you happen to come across egg capsules, those of L. scutulata have two rims of different diameters, while those of L. plena have two rims nearly equal in diameter.

Habitat and Range
Like many other Central Coast periwinkles, this species is abundant throughout the intertidal zone on both exposed and protected rocky shorelines. It is also found in salt marshes and estuaries. Its range extends from Kodiak Island, Alaska to the Baja California Peninsula.

Intriguing Information
Like L. scutulata, L. plena has a free swimming larval stage that settles onto rocky shorelines after several weeks of feeding on free-floating phytoplankton.