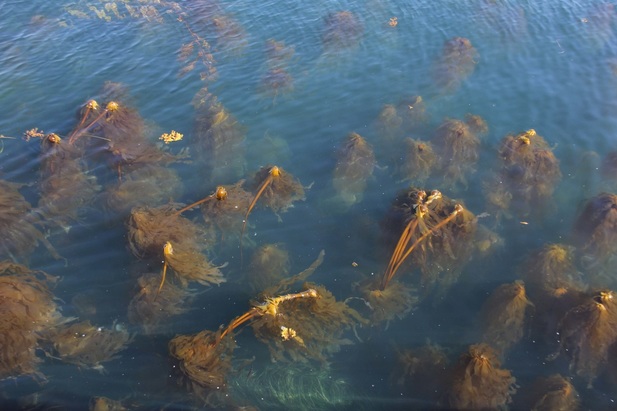 Identification
Bull kelp is commonly found washed up on beaches on the Pacific Coast, especially in winter once it dies off for the year. It is easily identified by the large, almost spherical bulb (float) at the end of the long stalk (stipe). The floats can reach 12 cm across. Many long narrow blades originate from the bulb; these blades can be up to 3 m long. The stipe may grow up to 20 m long. At the opposite end of the long stipe is a highly-branched holdfast (haptera) that can be up to 40 cm across. When bull kelp is alive it can be seen floating offshore, the floats bobbing in and out of the waves.

Habitat & Range
Bull kelp anchors to rocky substrates most commonly in locations with high current or moderate wave action. It can be found in the intertidal and subtidal, attaching to rocks up to 20 m deep. This species can grow at relatively high densities, forming large kelp forests. Bull kelp ranges from the Aleutian Islands south to California.

Similar Species
Other kelp species are similar to bull kelp, especially when viewed from afar. Giant kelp (Macrosystis integrefolia) is the most similar, but it is branched, has many smaller pear-shaped floats on each plant, and is not found as deep as bull kelp. Despite its name, giant kelp is smaller than bull kelp.

Human Uses
Bull kelp, like many other seaweeds, is harvested for human consumption and is sold fresh or dried. It has also been used to make fertilizer.

Intriguing Info
Bull kelp plays a key role in marine ecosystems. It forms large kelp forests, which provide habitat — including food and shelter — for many other species. When the forests die off in the winter, the remaining floating kelp masses are still important to many marine species.

Sea urchins, sea otters, and bull kelp are intimately tied together. When sea otters are absent, sea urchin populations can rise to levels where they may devastate kelp forests. These "deforested" areas of ocean floor are known as 'urchin barrens,' and the important kelp forest habitat is absent. Sea otters were absent along much of the west coast until very recently, as a result of overhunting in the 18th and 19th centuries. For more on the role of sea urchins and kelp forests, see this article.