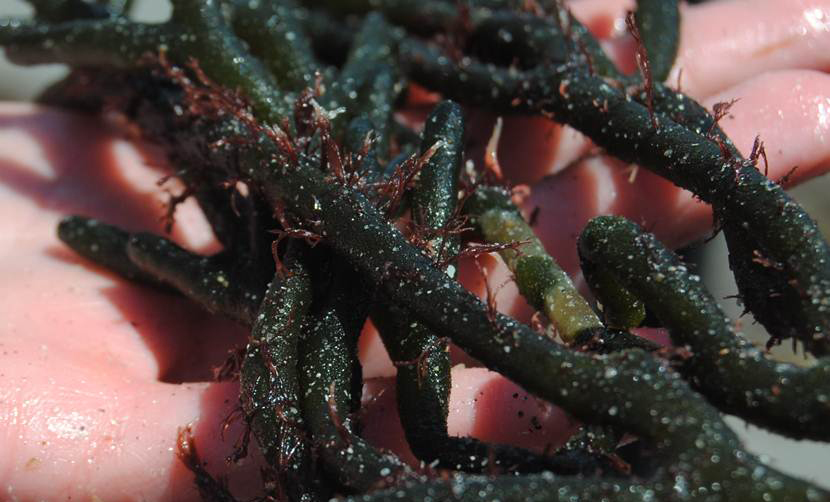 Ceramium codicola growing epiphytically on sea staghorn (Codium fragile).
Identification
Ceramium codicola is one of seven species in this genus, most of which can be hard to differentiate without microscopic examination. Like other Ceramium species found in the Pacific Northwest, C. codicola is a delicate red alga with fine branching and branch tips that are split to resemble crab pincers. The arrangement of small cells over a large central axial cell creates dark and light banding along branches when held up to light.

Habitat & Range
C. codicola grows epiphytically on sea staghorn (Codium fragile), which is found in the low to mid-intertidal of semi-exposed shores (photo). The range of C. codicola extends from Alaska to California. It is also reported in Australia and New Zealand.

Similar Species
All seven Ceramium species found in the Pacific Northwest have forcipate (pincer-like) branch tips and banded branches, though approximately half of these species are rare or only found in the subtidal. Microscopic examination is usually required to definitively identify Ceramium species. C. codicola appears to be an exception, as it is either the only species of its genus found on staghorn felt (as reported by Lamb and Hanby), or it shares this feature with only one other Ceramium species (Druehl). Either way, it appears to be the most common epiphytic algae on sea staghorn.