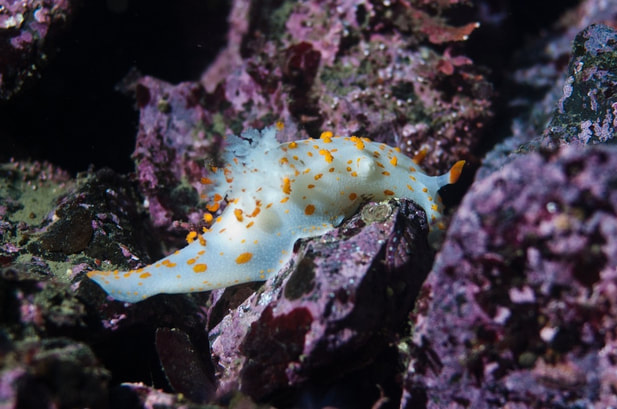 Photos by Mike Munroe (top) and Jenn Burt.
Identification
This distinctive nudibranch is white to pale yellow, somewhat translucent, and has orange spots, papillae, and rhinophores (photo). It gets to 15 cm in length. It is a dorid, meaning it has a flattened shape. Unlike most dorids its gill plume, found in the middle of its dorsal side and also tipped with orange, is not retractable. Click here for a photo of its egg ribbon pattern.

Habitat & Range
The clown nudibranch is found around rocky areas and kelp beds in the intertidal to a depth of 35 m. Its range extends from the Aleutian Islands to Baja California. It is also found in the Sea of Japan.

Similar Species
The spotted Triopha (Triopha maculata), found from southern BC to Baja California, can be similar but opposite colours: it often has white spots on an orange body, though the body can vary to pale yellow or brown.

Intriguing Info
This species can crawl on the underside of the surface 'film' of water in tidepools - a feat which usually only smaller nudibranchs can perform.