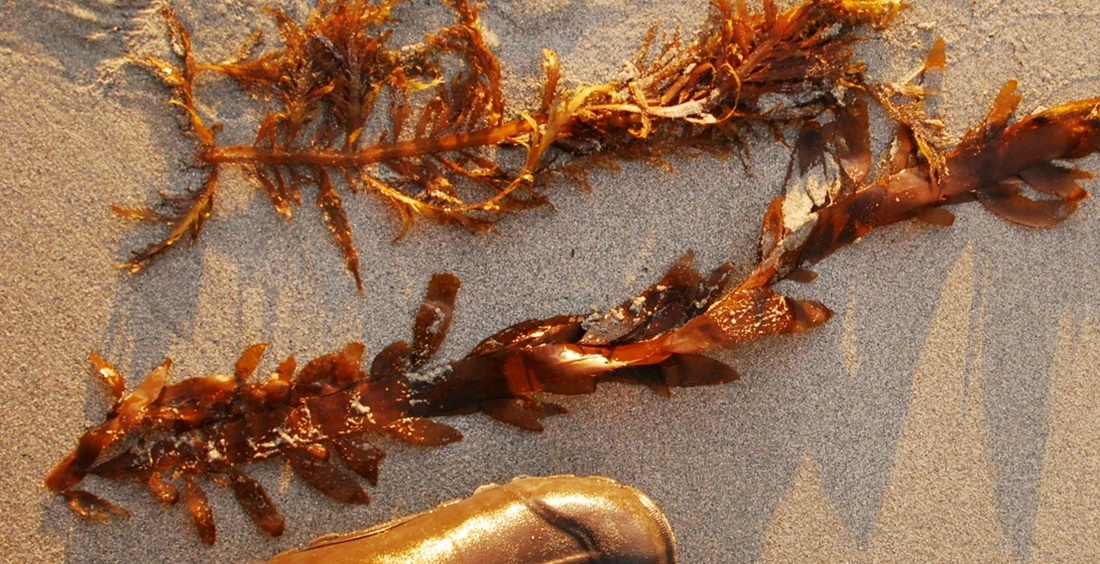 Coarse acid kelp (bottom) laid out for comparison against winged rib (top). Photo by Joel White.
Identification
This annual brown seaweed has a flat 4-10 cm wide blade bearing a distinct midrib along its entire length. Wide, flat branches (at least 1 cm wide) also bear midribs at maturity. The blade is attached to a non-branching holdfast via a flattened stipe. The entire structure of this algae is strap-like (ligulate). It can get to 8 m long.

* Note: there is uncertainty regarding the distinctions between some Desmarestia species, including D. latissima, D. ligulata, and D. munda. Currently all three are accepted species, however more work needs to be done to determine if any of these species or others in the genus are morphological variations of the same species. Gabrielson et al. describe D. ligulata as having more than two orders of branching and branches measuring less than 1 cm wide, whereas D. latissima has one or two orders of branching and branches measuring more than 1 cm wide. Other sources distinguish D. ligulata and D. munda on similar grounds, with the latter having wider branches than the former, and branches at least as wide as the main axis.

Habitat & Range
This algae can be found in the shallow subtidal or low intertidal of semi-exposed habitats. Its range extends from northern British Columbia to Baja California, Mexico.