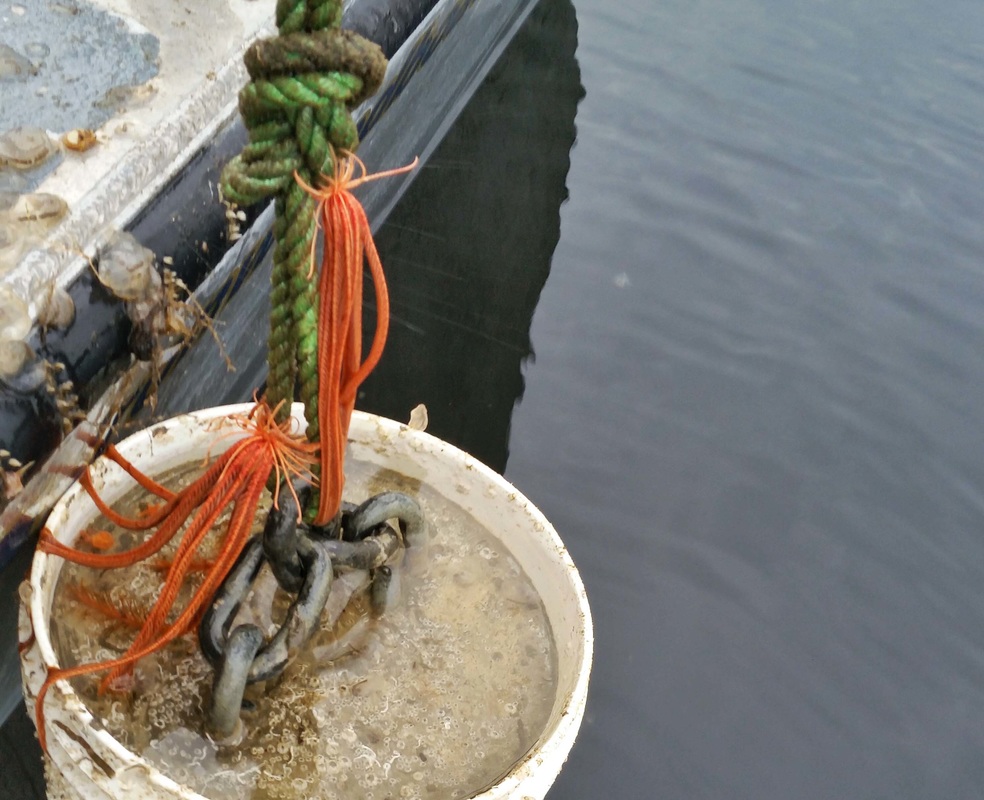 Feather stars found attached to weights on the Hakai Institute dock. Photo by Will McInnes.
Identification
​This sea star relative (Class Crinoidea) is by no means a common sight as its name might suggest, however it is the only one known to live in shallower, more accessible waters in the Pacific Northwest. Its 10 feathery arms—which are actually five main arms, each divided in two—reach 10 cm long and may be mistaken for blades from a fern-like seaweed or hydroid. The main arms attach to the upper (oral) side of a small central disc; on the other (aboral) side is a circle of joined appendages (cirri) that grasp onto hard substrates. While these cirri may appear similar to a seaweed's holdfast, the attachment is only temporary. The cirri are capable of detaching and reattaching to surfaces as the animal moves around, which it does so by 'walking' via the cirri or by swimming using its long rays. The common feather star varies in colour from tan to reddish, and is 25 cm across when its arms are spread out. See the E-Fauna species gallery for more photos.

Habitat & Range
The common feather star is found attached to rock (or other hard substrates, such as the weight system above) in areas with strong currents from 10 to over 1000 m deep. It is more common in deeper water. It may also be found in the water column if it has been recently disturbed; when this occurs, it detaches its cirri and swims using its 10 arms. The known range of this feather star extends from northern Alaska to northern Mexico, though it might extend further south into South America.

Similar Species
The other feathers stars found in Pacific Northwest waters—at least three others—are only found in deep waters. The rough feather star (Florometra asperrima) and the common feather star are sometimes used as synonyms for the same species, however recent genetic work may confirm that they may be two separate but very similar species. F. asperimma has been recorded in waters 79 m and deeper.

Intriguing Info
Feather stars use their arms to capture suspended food, which is why they prefer areas with currents that can provide a steady flow of 'new' water containing food. Cilia and tube feet transport food from the arms to the mouth. Feather star arms break easily when the animal is disturbed, but can regenerate.