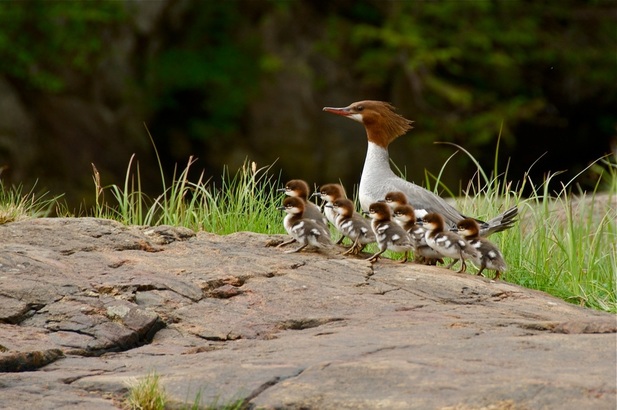 Top: adult female common merganser with chicks, photo by Chris Darimont. Bottom left to right: adult male, adult female, and males and females together (bottom right bird is a male red-breasted merganser). Photos by Mike Yip.
Identification
The common merganser is a large diving duck, with distinctive plumage but substantial differences between males and females. Both have a long and thin orange-red, hooked bill and wing white patches that are visible in flight and sometimes when folded. Males have a dark green-black iridescent head, white breast and sides, and a black back.
Females have chestnut heads with a crest running down to the base of the head. This crest varies in size but is usually quite visible. Females have a white chins and breast, and a grey back and wings. Juveniles and nonbreeding males have the same colouring as females.

Habitat & Range
The common merganser is found in most areas of North America. Its winter range is in the United States, while itssummer distribution stretches across most of Canada except for the far north. The Central Coast and northwestern United States are home to year-round populations. The common merganser is usually found in freshwater lakes and rivers, but also spend times in estuaries and coastal bays.

Intriguing Info
Common mergansers dive for fish; seagulls and bald eagles sometimes try to steal fish from them when they resurface.