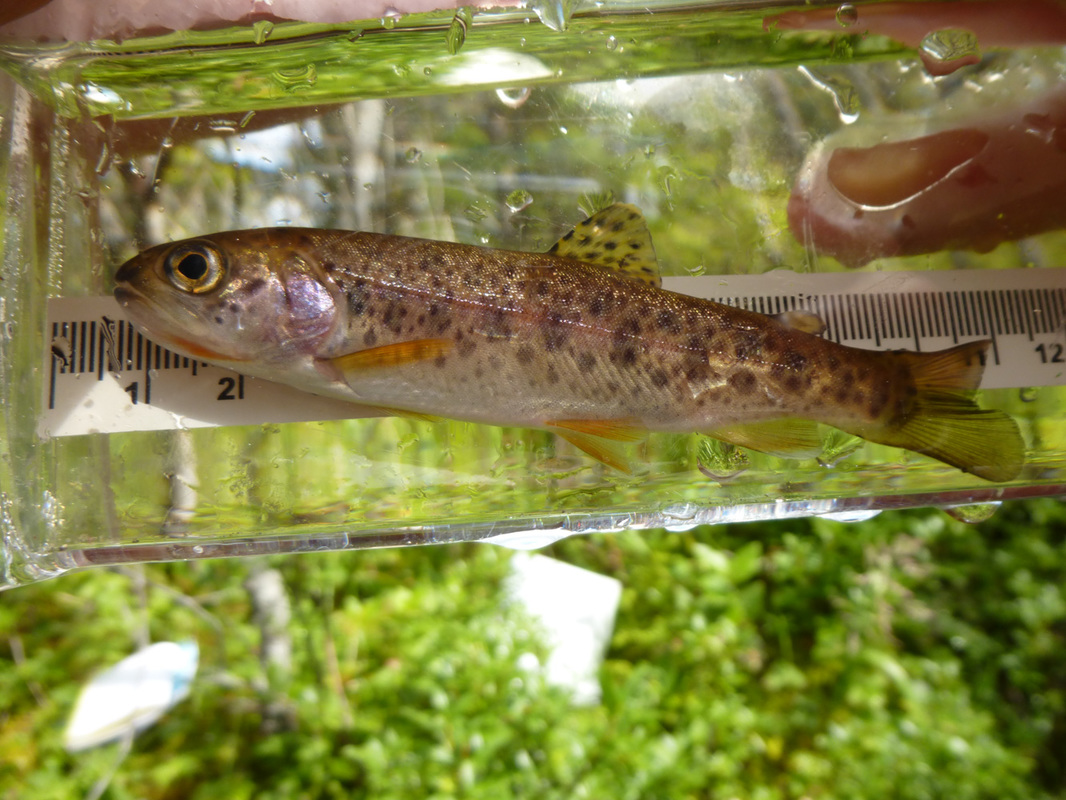 Juvenile cutthroat trout. Note the reddish slash under the lower jaw. Photo by Jeff MacAdams.
Identification
The cutthroat trout can be identified by a distinctive reddish slash under its lower jaw. Its body colour varies, though it is usually a dark greenish to blue on its back, transitioning to olive green on the upper sides, then to silvery on the lower sides and belly. Its body is spotted all over, including the belly, head, and fins. Its lower fins can be yellowish or orangey-red. When living at sea it tends to be more silvery and may have a yellowish belly; when living in freshwater it is darker and has a brassy sheen. The maximum recorded size for this species is 99 cm and 18.6 kg, though they are usually much smaller (less than 10 kg).

Habitat & Range
Some cutthroat trout remain in freshwater for their entire lives, whereas others migrate to sea but tend to remain in estuaries or nearshore environments, and move towards and away from land with the tides. These anadromous  fish tend to return regularly to freshwater for winter or to feed, and may travel up to 100 km from their natal stream to a feeding stream. They return to their natal streams to spawn, which usually occurs in spring. When in freshwater cutthroat trout inhabit gravelly streams and lakes, with small, clean, and cool streams being preferred for spawning. Fish that remain in freshwater may have home territories which they never stray. This species can be found in nearly every lake and stream along the coast that empty into the Pacific Ocean — including those on coastal islands — from southern Alaska to northern California (the Eel River). It has been introduced into some lakes in eastern North America.

Similar Species
The steelhead (rainbow) trout is less extensively speckled, has a shorter head, and lacks a red or orange streak under its lower jaw. Click here for a comparison of the heads of these two species.

Human Uses
This species is targeted by sport fishermen.
​
Intriguing Info
This species is blue-listed (considered vulnerable) in British Columbia. The populations that appear to be declining the most are in southern BC (near Vancouver and on the east coast of Vancouver Island). This species requires small streams for spawning, and such streams are easily degraded, altered, or destroyed completely when in the midst of residential and agricultural areas as well as other human activities.