Dall's porpoise, spray porpoise • Phocoenoides dalli
{Phocaen = porpoise; dalli = after William H. Dall of the US Geological Survey and US National Museum in the 1800s) 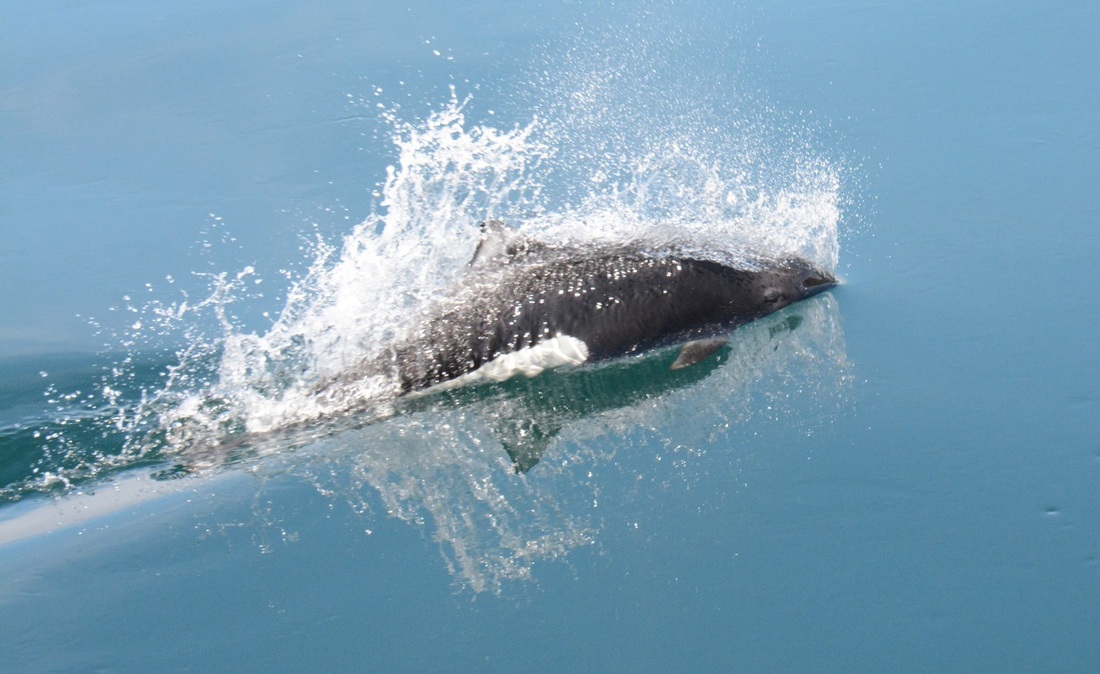 Dall's porpoises often stern- or bow-ride on nearby boats. Photos by Alison Ogilvie.
Identification
Dall's porpoise is one of two porpoise species found in coastal BC waters; the other is the harbour porpoise. It has been described as a "little black and white torpedo" in both appearance and behaviour. It has a distinctive white patch on its lower stomach and sides behind its flippers. This spot is usually visible even when submerged. Most of the rest of its body is dark grey or black, with light grey patches on its dorsal fin and fluke tips. It has a stocky body that reaches 2.2 m long, a small head and short flippers, and its relatively small dorsal fin has a hooked tip. This species can be found in groups of up to 20, though usually there are no more than five in a group.

Dall's porpoises love to bow-ride faster moving boats (go under 11 knots, or 20 km/hr, and they will lose interest). They do not usually jump right out of the water, but may leap high enough for their white patches to be visible above water. They make a V-shaped splash known as 'rooster-tail' when they leap out partway. Their dives are slow and short (2-4 minutes), and when diving the rear of their body forms a sharp curve.

Habitat & Range
This porpoise is found in both nearshore waters and the open ocean in the North Pacific, and it may be the most common cetacean in this region. On the BC coast it is particularly common in areas with deep underwater channels. It migrates between nearshore and offshore waters as well as between the northern and southern areas of its range. These do not appear to be major migrations, however, as the species is present year-round in much of its range.

Similar Species
The harbour porpoise (Phocoena phocoena) looks similar from a distance, but tends to shy away from boats and almost never bow-rides. It rarely leaps out of the water and usually only the tips of its dorsal fin will break the surface as it comes up for air. Dall's porpoise often bow rides, and while its body does not clear the water it does leap out partially. The Pacific white-sided dolphins commonly bow-rides as well, and is approximately the same size as Dall's porpoise. Its dorsal fin is noticeably larger and strongly curved, and it does jump right out of the water. Its colouring is somewhat different as well, but this may not be obvious in water.

The following videos show Dall's porpoises bow-riding (left), and a comparison between Dall's porpoises, Pacific white-sided dolphins, and killer whales (right).
Human Uses
These porpoises are a draw for whale watching boats because of their bow-riding behaviour. They must be the ones to approach boats however, rather than the other way around. Canada's whale watching guidelines advise boaters to avoid sudden changes in course when dolphins or porpoises are bow-riding, and not to drive through groups of dolphins or porpoises in the hopes that they will start bow-riding.

Intriguing Info
Dall's porpoises can swim at speeds of up to 55 km/hr (20 knots) and are the fastest cetaceans in BC waters. They are also one of the most common and numerous; estimates put their numbers in the North Pacific in the hundreds of thousands or millions.
Dall's porpoises and harbour porpoises may occasionally hybridize. The hybrid offspring tend to have the body shape and behaviour of a Dall's porpoise, and the colouring of a harbour porpoise.