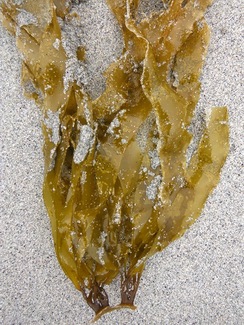 Photo by Bridget Woods
Identification
This brown alga has a thin and narrow blade that can reach 35 cm in length but is usually less than 10 cm. It is light to medium brown and has smooth but slightly ruffled edges. It grows from a small disc-shaped holdfast. It also has a crustose stage, which forms under certain environmental conditions (long days and high temperatures).

Habitat & Range
False kelp grows on rock as well as epiphytically on surfgrass and eelgrass (Zostera marina) from the mid-intertidal to shallow subtidal. It is found on shorelines not exposed to direct wave action. It is found on both sides of the North Pacific: its range extends from northern Mexico to the Aleutian Islands, Alaska, and along the Bering Sea to Siberia, Japan, China, and Korea. It is also found in the Arctic Ocean, coastal Chile, the North Atlantic, and the Mediterranean, Baltic, and North Seas.

Similar Species
False kelp can be mistaken for young blades of Laminaria and Saccharina species; these true kelps have thicker blades than false kelp.

Intriguing Info
This species, a member of the Order Ectocarpales, has the common name 'false kelp' due to its similarity in appearance to true kelp species, which compose the Order Laminariales.