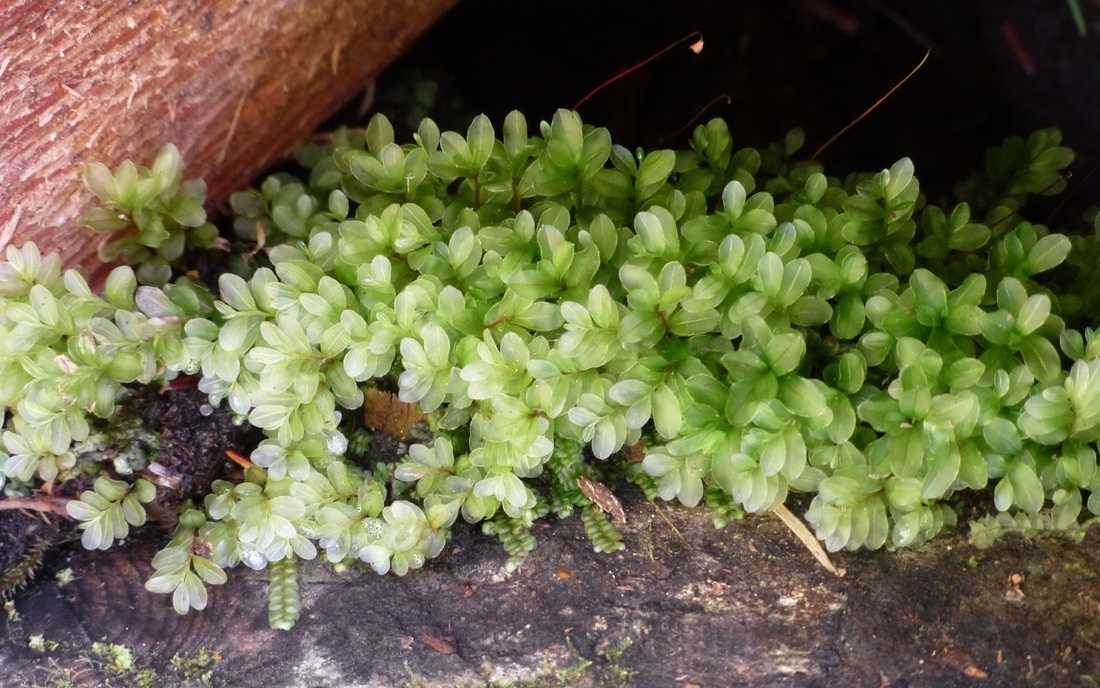 Identification
Fan moss is a small leafy moss species that has separate male and female plants. It reaches 3 cm tall, has smooth, rhizoid-free stems, and large (3-6 mm long) oval leaves. The separation of male and female plants is a distinguishing characteristic. Male plants have flower-like rosettes of leaves just at their stem tips, and female plants have leaves continuing down their stems. The sporophytes attach to the tip of the female plants, and have cylindrical hanging capsules. The leaves are another distinguishing characteristic. They are oval-shaped and have smooth edges, with a distinct border composed of 3-4 rows of elongated cells that contrast against the rest of the hexagonally-shaped cells. When the leaves are moist they spread out, as in the above photos, but when dry they shrivel and flatten against the stem.

Click here for a more detailed description and some useful illustrations, and click here for some great close-up photos of this species.

Habitat & Range
Fan moss is a very common species in coastal coniferous forests. It grows on decomposing logs, soil-covered rock, and soil rich in decaying plant matter. It grows at low to subalpine elevations, and is found along the coast from southern Alaska to central California, and east to western Montana.

Similar Species
Multiple coastal species look fairly similar to fan moss at first glance. The leaves of badge moss, magnificent moss, and red-mouthed leafy moss have toothed edges. Magnificent moss is usually found south of the Central Coast. Species of the same genus may cause some identification problems as well. The stems of hairy lantern moss bear root-like filaments (rhizoids), which fan moss does not, and felted leafy moss is found only in peat wetland habitats, has less of a leaf border, and is smaller. Naked rhizomnium moss is the most similar — it has nearly circular leaves, and when dry it changes form very little.