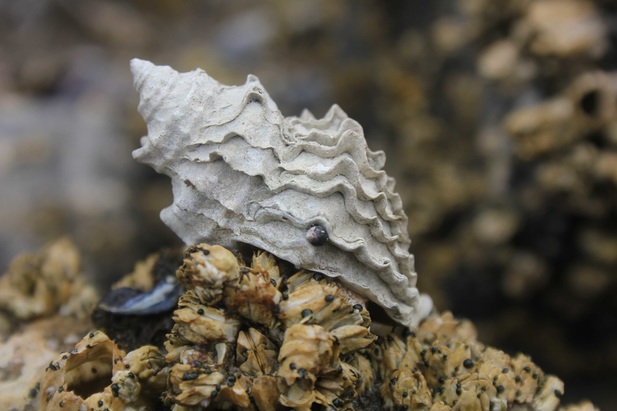 Photo by Ian Thomas
Identification
​Virtually all shell characteristics of this species are variable, including colour, thickness, texture, banding and sculpture, making identification somewhat tricky. Shell colour can be uniformly grey, white, pale brown, orange or even purple and may have coloured bands. In exposed areas, shells may be smooth, while in more sheltered areas, shells may have up to 12 frills (lamellae). Shell height typically falls between 50 mm and 80 mm.

Habitat and Range
​The range of this species extends from the Aleutian Islands south to central California. It typically inhabits rocky shorelines from the low to mid intertidal zones, and is often found in mussel beds.

Intriguing Information
This species is a predatory whelk, and feeds on acorn barnacles (Balanus glandula) and mussels by using its radula to drill through the shell of the prey. This creates a hole through which the whelk inserts a long proboscis to ingest the prey.

Shell texture and the presence of frills (lamellae) not only varies with exposure (see above), but also with the presence or absence of their major predator, Cancer productus. In the presence of C. productus, this species have been observed to grow axial frills.