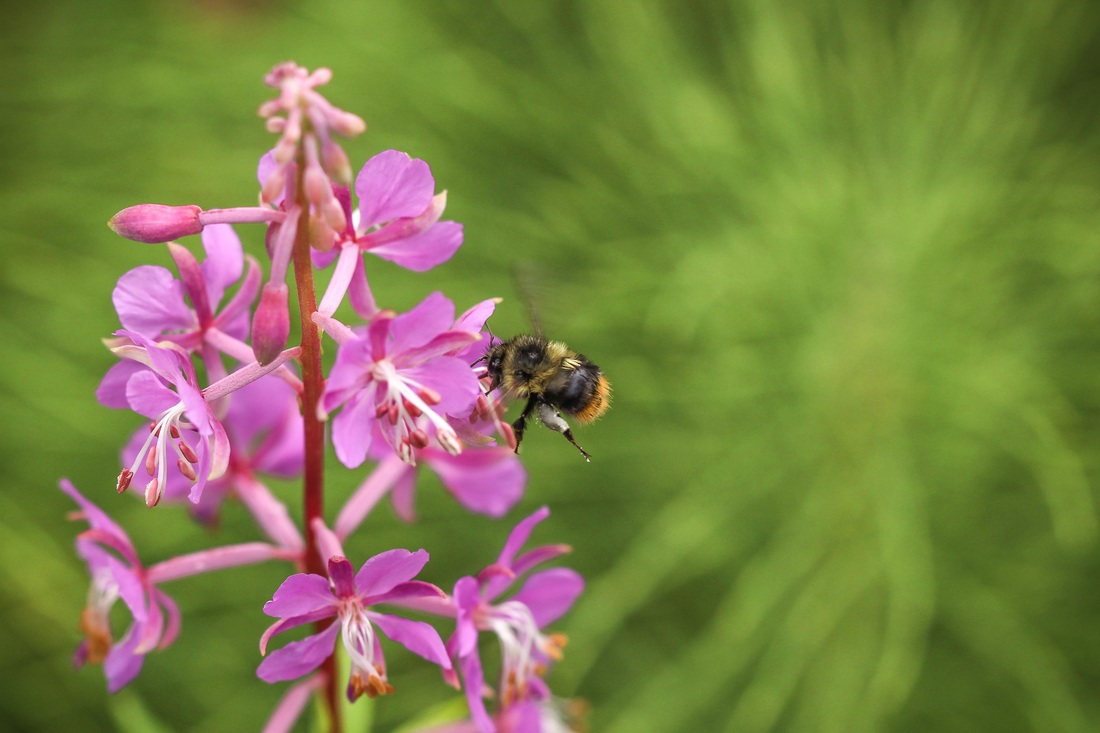 Bombus mixtus on fireweed, photographed by Josh Silberg.
Identification
The hair on this bumble bee is mixed yellow and black on the face and thorax, and yellow, black, and orange on the abdomen. The pattern of these colours on the abdomen is a key identifying feature, at least for females of this species. The yellow anterior section of the abdomen (terga 1 or 1-2) is separated from the orange posterior end (terga 4-5) by a complete or incomplete band of black. The black band may not extend through the middle (apex) of that section of the abdomen, but it will be present along the sides. Identifying male bumble bees to species can be trickier than females — and to make matters worse, colour is not always a reliable characteristic for either as colour mimicry between species is not uncommon. However with this species the yellow-black-orange colouring generally applies to males as well. Click here for more Bombus mixtus images.

While colour pattern is the most obvious and easily accessible ID feature, its variability means examining smaller features, such as tongue length, can help secure an accurate identification. Bombus mixtus has a medium-length tongue, as well as a square-shaped head. Its hair length is medium overall, but uneven, giving it a fuzzier appearance than some other bumble bees. See page 61 of Bumble Bees of the Western United States for more identification details.

Habitat & Range
Bombus mixtus is found in open grassy and shrubby habitats, as well as mountain meadows. It is associated with plants in the genera Rubus, Epilobium, Penstemon, Rhododendron, Senecio, and Lupinus, among others. This common species is most often found at higher altitudes (including tundra) and elevations; its range extends along the Pacific coast from Alaska south to California, and eastward into the Rocky Mountains. While it is mainly found in western North America, populations are also reported in the Great Lakes region, northern Quebec, and Labrador.

Similar Species
Many other bumble bee species are coloured yellow, black, and orange, but the ordering of these colours along the abdomen of Bombus mixtus—with black separating yellow and orange—is unlike most other bumble bees found in the Pacific Northwest. One of the more similar species, Bombus frigidus, is mostly found at high elevations in western mountain ranges. The abdomen of Bombus bifarius, another common west coast bee, may have a somewhat similar pattern (yellow-some black-orange-yellow), but this colouring appears to be limited to subspecies found in the eastern part of its range.

Intriguing Info
While issues such as habitat loss and degradation, competition from non-native bees, pesticide use, and climate change are impacting many bumble bee populations, currently levels of this relatively common species appear to be stable. The IUCN recommends some general conservation practices for supporting wild bees, including the following: habitat restoration and preservation; restriction of pesticide use, especially when plants are in flower; increase the use of pollinator-friendly plants such as legumes along the margins of agricultural fields; and avoid the introduction of non-native bees into areas with high-quality habitat for native bees. Click here for more information.