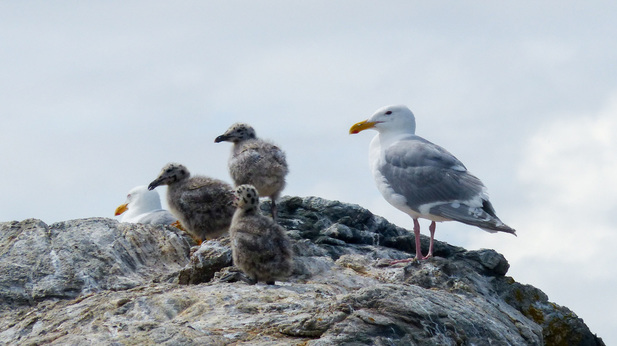 Glaucous-winged gulls with chicks. Photos by Brian Starzomsmki.
Identification
The glaucous-winged gull is one of a number of similar-looking gulls. It is a large gull, and in breeding plumage it has a clean white head, neck, underparts, and tail; its back and most of the tops of its wings are a light silvery grey, and its wingtips are grey with white spots near the ends. Its legs are pinkish and it has a red spot on its lower bill. The adult non-breeding plumage is similar but less bright and crisp: the head, neck, and breast are streaked or smudged with a brownish hue, and the legs and bill are duller and paler. The plumage of immature glaucous-winged gulls is quite different, and evolves as the bird ages. Click here for a detailed description of each developmental stage.

Habitat & Range
The glaucous-winged gull mostly inhabits coastal habitats, and is commonly found around beaches, rocky shorelines, estuaries, and bays, though it also may be seen around ponds, fields, buildings, and garbage dumps near the coast. This gull is a year-round resident on the Central Coast. This resident range extends along much of the Pacific Northwest and through the Aleutian Islands. Some move south to a winter range along the coast from Oregon to Baja California, and some that breed along more northern coastlines in Alaska retreat further south for winter. Click here for a range map, and visit the BC Breeding Bird Atlas for more information on its distribution in British Columbia.