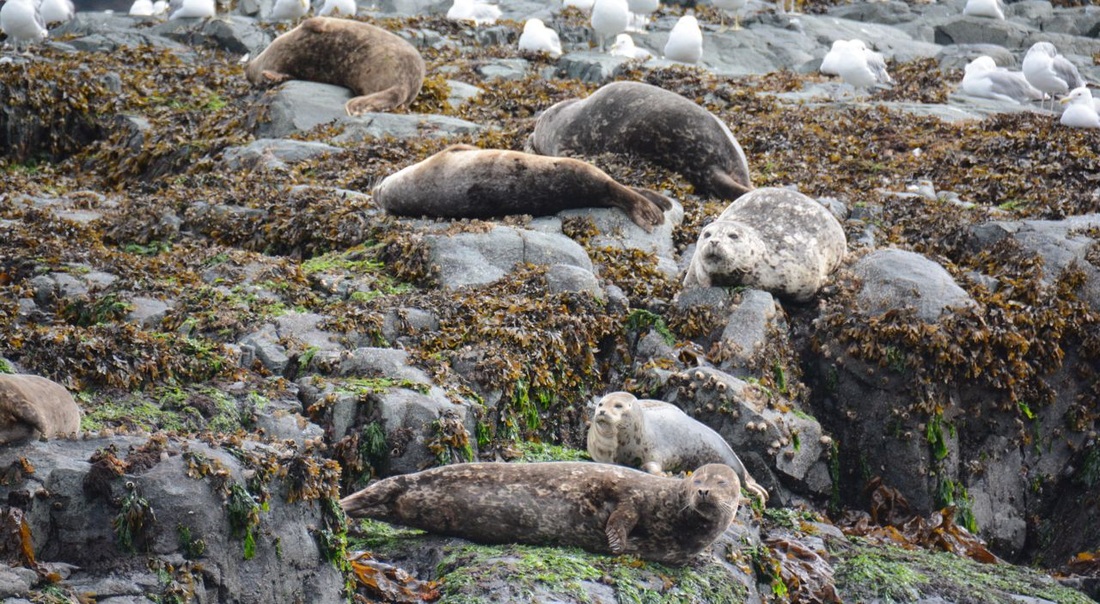 Identification
The Pacific harbour seal belongs to the family of earless seals (known as true seals). This species is often spotted with just its smooth round head and whiskered snout popping above water as it curiously checks out its above-water surroundings. It is relatively small at an average of 1.2-1.6 m long. Colouring varies from almost black to almost white and is usually mottled with blotches or spots. It can also be dull brown. This species has short, hairy flippers.

While the Pacific harbour seal looks very sleek and agile below water, on land it appears relatively rotund and awkward. It usually lies on land in a 'head-up, tail-up' position, which looks like it is balancing on its belly. See more photos on the harbour seal ARKive page.
Habitat & Range
Harbour seals can be found in coastal temperate and arctic waters in the North Pacific and North Atlantic. The eastern Pacific subspeices, richardsi, is found along the west coast of North America from Baja California to Bristol Bay, Alaska, and westward along the Aleutian Islands. It is common in coastal BC waters, and individuals will enter navigable rivers and connected lakes. Above-water Pacific harbour seals are usually found resting in groups in haul-out sites such as tidal reefs and sandbars, or low-lying intertidal areas. They are present year-round in coastal BC waters, and are relatively territorial.

Human Uses
Before 1968 Pacific harbour seals were harvested for their pelts, and over-harvesting drastically reduced numbers. Populations numbers are now up to pre-exploitation levels. The BC population was estimated at around 10,000 in the 1970's, and now is up to 105, 000. Read more about population trends in the DFO Population Assessment.

Intriguing Info
Harbour seals swim on the surface and below water while pursing prey. They can be submerged for up to 28 minutes, and can sleep underwater if there is no available site for them to haul out onto land. Newborns are able to swim almost immediately.

Harbour seals feed on some fish species that are targeted by recreational and commercial fishers, including salmon, lingcod, and herring, and as a result are often seen as a nuisance by these industries. They are also recognized in BC as an ecologically significant species' due to their high-level predation as well as their role as prey for transient killer whales, and as such could potentially be used as an indicator species. Transient killer whale population levels may be linked to harbour seal populations.