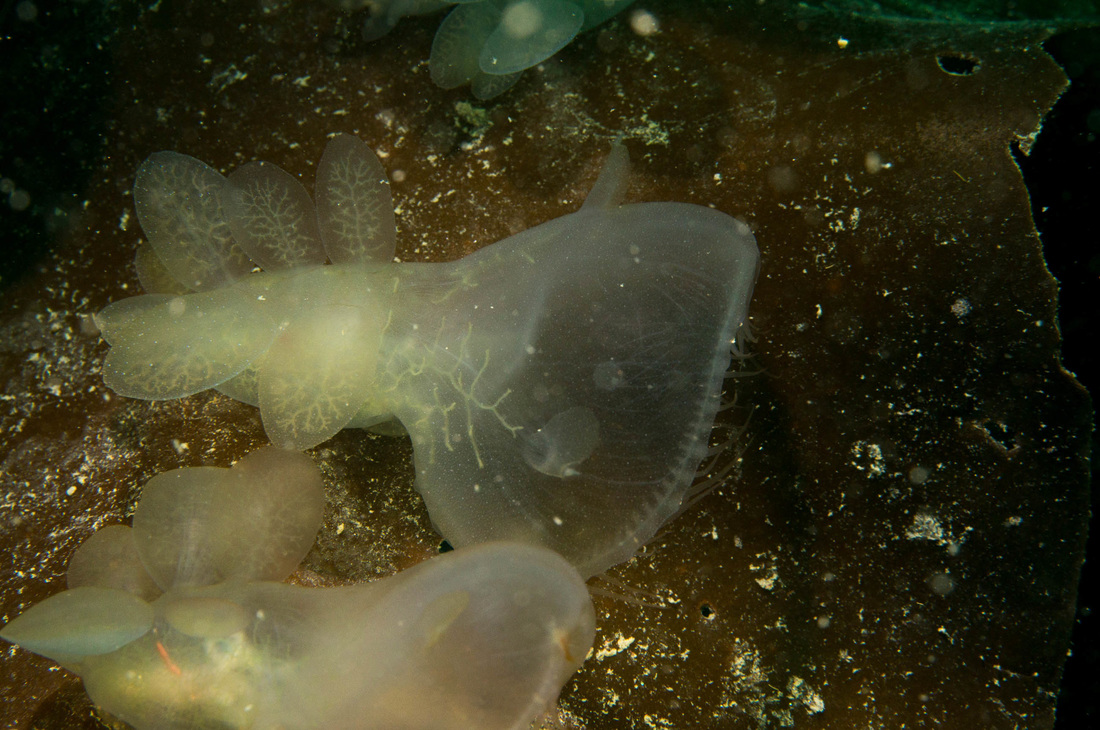 Top photo by Wiebe Nijland. Bottom left: photo by Nathaniel Glickman. Bottom right: hooded nudibranchs feeding near a dock, photo by Linda Brown.
Identification
The hooded nudibranch is easily recognizable by it's uniquely large, tentacle-fringed oral hood. Small stout, rhinophores attach to the top of the hood in an ear-like fashion. Pairs of paddle- or flipper-like appendages  (respiratory appendages called cerata) line its body behind the hood, in a manner reminiscent of a stegosaurus (illustrated in this image). The nudibranch's body is mostly translucent, but may be tinged with yellow, greenish gray, or brown. It can be up to 17.5 cm long.

Habitat & Range
The hooded nudibranch is found on rocks, eelgrass and kelp in the low intertidal and subtidal, to 37 m deep. Large aggregations of this species on kelp and eelgrass are not uncommon at warmer times of the year. If dislodged or disturbed by a predator, this species may also be seen "swimming" in the water column by flexing its body back and forth towards a new location (click here for a video with footage of this surprising behaviour). The hooded nudibranch's range extends along the Pacific coast from Alaska south to California.

Similar Species
Its translucent appearance and tentacle-fringed hood gives the hooded nudibranch a somewhat jellyfish-like appearance, particularly when "swimming" in the water column.

iNaturalist
https://www.inaturalist.org/taxa/48455-Melibe-leonina
​
Intriguing Info
This nudibranch uses its flexible and expandable hood to capture prey, such as zooplankton, jellyfish, and even small fish. Once trapped in the hood, the two sides of the hood sweep together, the tentacles hold the prey in, and the hood contracts to force the food towards the nudibranch's mouth. Click here to watch this feeding technique in action.
Left and top right: aggregations of hooded nudibranchs on kelp, photographed by Angeleen Olson. Bottom right: this view is of the underside (foot), with the two images showing the progression of hood contraction during feeding. It appears to be attached upside down to the surface of the water, via surface tension, rather than actively swimming. Photos by Linda Brown.
References
Harbo, R. M. (1999). Whelks to whales: Coastal marine life of the Pacific Northweest. Madeira Park, BC: Harbour Publishing. P. 117.
Lamb, A., and Hanby, B. (2005). Marine Life of the Pacific Northwest [electronic version]. Madeira Park, BC: Harbour Publishing.
Melibe. Monterey Bay Aquarium. Accessed 07/01/2016.
​
Authors and editors of page
Chanda Brietzke, Kelly Fretwell, and Brian Starzomski (2016).