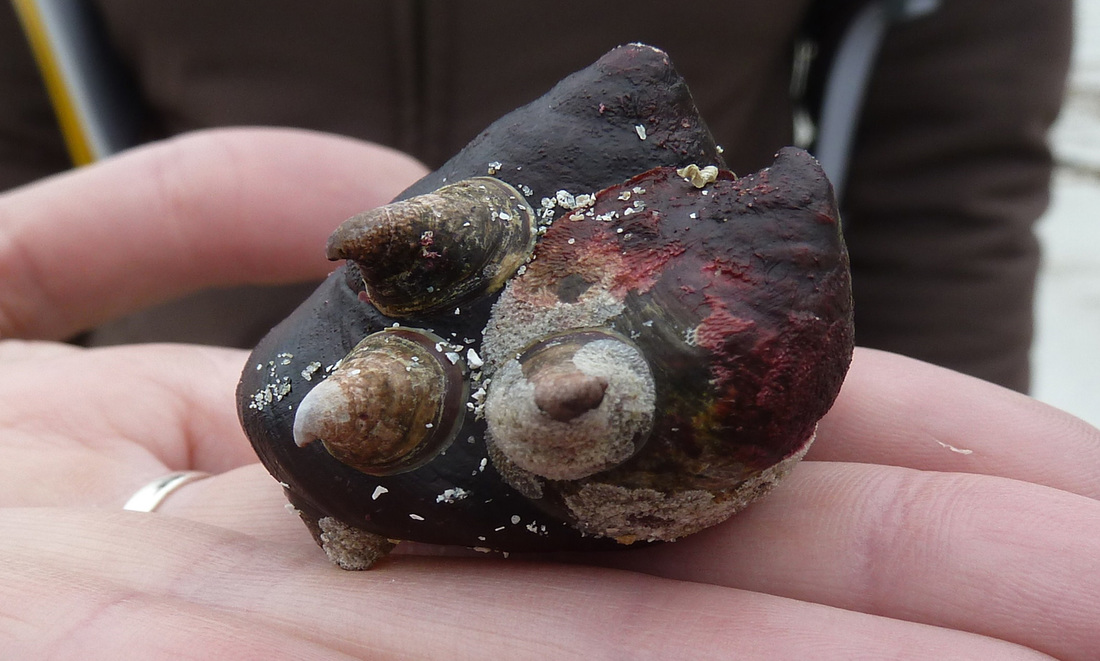 Hooked slippersnails on a turban snail. Photo by Elyse Matthews.
Identification
​The uniquely curved shell of the hooked slippersnail can reach 2.5 cm across. This species is distinguished by the shell’s arched, beak-like apex that curves beyond the posterior of the shell. The exterior shell layer (periostracum) is dark brown, while the interior is white.

Habitat and Range
This species is epibiotic, meaning that it lives on the surface of other organisms. It is commonly attached to Calliostoma funebralis and Calliostoma ligatum, where it remains more or less sedentary while the host is mobile. It is found from the mid to low intertidal to depths of approximately 19 m, and its range extends from Haida Gwaii to Baja California.

Similar Species
Hooked slippersnails are quite unique, however a related species native to the Atlantic Ocean, C. fornicate, has been introduced to some regions of the Pacific Northwest. The introduced C. fornicate is less common, and generally larger (up to 5 cm in length).

Intriguing Information
Most snails feed using a rasping radula to scrape algae and detritus from hard surfaces, however this sedentary species is a filter feeder. By releasing a net of mucus into its surroundings, the hooked slippersnail can filter plankton and detritus from the water column, thereby avoiding the need to be mobile to obtain food.

Hooked slippersnails are sequential hermaphrodites, and all individuals begin life as males. If a male settles on the shell of another male, the base male becomes female. Females brood their eggs in capsules under their shell, and offspring emerge in the form of tiny adults that typically grow to about 4 mm before seeking a host shell.

A recent study that explored host specificity of this species suggests that hooked slippersnails opt to be epibiotic on Calliostoma ligatum because the latter has more effective chemical and physical defense mechanisms than alternate hosts. In the study, C. ligatum had more success repelling and evading attacks from the predatory sea star Leptasterias hexactis than the alternate host, Margarites pupillus.

Authors and editors of page
Bea Proudfoot and Kelly Fretwell (2016)