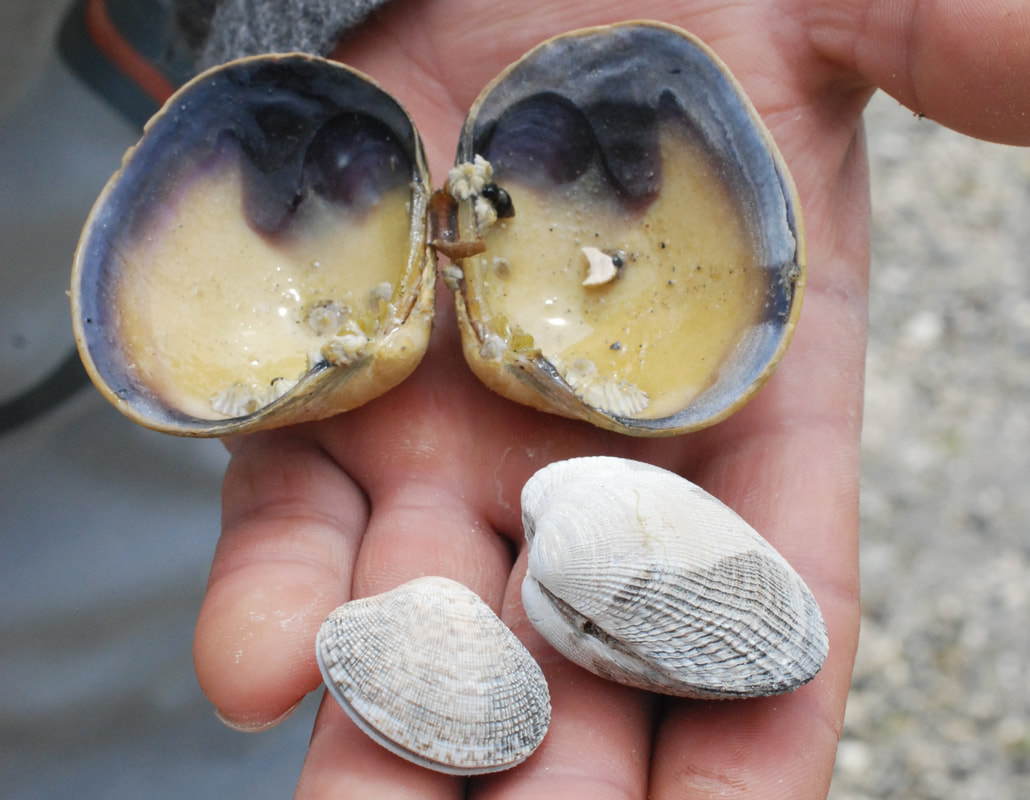 Kelly Fretwell
Identification
This introduced species ​has a thick elongated oval-shaped shell. Radial ribbing crosshatched with concentric lines form a  latticework texture on the exterior of the shell. The whitish or greyish exterior may have darker grey or brown patches, streaks, or angular patterns. The interior margins are smooth and commonly stained with purple to some extent, with white or yellow in the centre. The siphons are short, with black separated tips. The maximum length for this clam is close to 8 cm.

Habitat & Range
The Japanese littleneck clam buries 4 cm deep in muddy, sandy, or gravel substrates in the high intertidal. Its North American range extends from northern BC to California. Its native range in Asia extends from the Kuril and Sakhalin Islands in Russia south to China, eastern India, and Southeast Asia. It is also an introduced species in coastlines throughout Europe.

Similar Species
The exterior shell of the native Pacific littleneck (Leukoma staminea) has a similar latticework texture and may also be marked with a dark angular pattern, however its shell is less elongated (it may be almost round) and the interior does not have the yellow or purple colouring that is often found on the Japanese littleneck. If you are still uncertain, run your finger along the inner edge of the shell: on the Pacific littleneck this edge is noticeably toothed, and on the Japanese littleneck it is smooth.

Human Uses
This species is one of the most widely cultivated bivalves in the world. It farmed and recreationally harvested in its native and introduced ranges. It is popular for its sweet flavour.

Intriguing Info
Its original introduction of this clam in North America was accidental: it is believed to have arrived along with Pacific oysters (Crassostrea gigas) brought from Japan for aquaculture. It was first reported in the Pacific Northwest in Washington in 1924, and was first reported in BC in Ladysmith Harbour in 1936. It was intentionally introduced in France and the United Kingdom for cultivation; it was believed to not be capable of establishing wild populations due to low temperatures, however it has become established in at least one location along the coast of the United Kingdom.

The establishment of wild populations of this clam in its introduced range has a number of potential ecological consequences, including competition with native clams for food or space and altered food webs. Such ecological consequences are not fully understood and their degree likely varies from place to place; in addition, the impacts of cultivation and harvest on habitat may also be a concern. See the NEMESIS species page for further information.