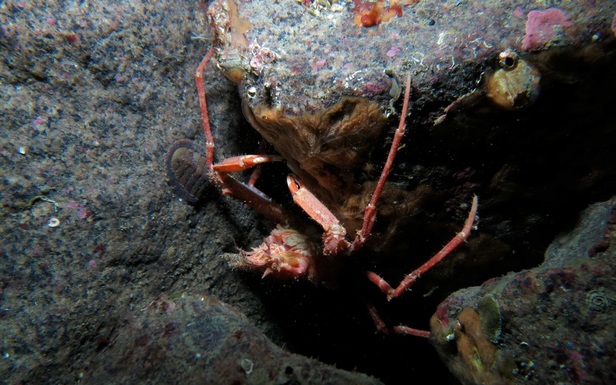 Photo by Jenn Burt
Identification
This decorator crab has a spiny, pear-shaped carapace that reaches 4.5 cm wide. Its rostrum is composed of two long divergent horns, and it has long, slender, and fairly smooth walking legs. It is often undecorated, or is decorated with bryozoans or sponges. Underneath its decorations this crab is a pinkish-orange colour, and often has white bands on its legs. See the E-Fauna and Rosario Beach Marine Laboratory species pages for more identification information.

Habitat & Range
This species is found in shallow subtidal habitats (9 m) to a depth of 1190 m (3900 ft.). It is found on rocks when in shallower depths, and on sandy, muddy, or shell-strewn substrates in deeper waters. Its range stretches from Kodiak, Alaska to Mexico.