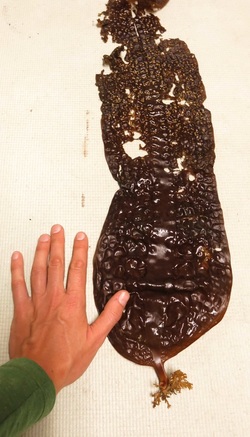 Photo by Jenn Burt
Identification
Net-of-cords kelp is a brown alga with long, narrow blades measuring up to 1 m long and 4-8 cm wide. The blades are covered in a network of ridges, giving them a wrinkled or bullate texture. These ridges can often form an irregular geometric pattern. Multiple blades attach to a short, flat, usually forked stipe, which anchors to substrates via a branched holdfast (haptera), also bearing forked divisions.

The blades of net-of-cords kelp may or may not have a midrib. Some older sources use this feature to differentiate Dictyoneurum reticulatum / Dictyoneuropsis reticulata (midrib) from  Dictyoneurum californicum (no midrib), however Gabrielson et al. treat the names as synonyms for one species (2012). Indeed, molecular data suggests that they are one species, and that morphological differences are the result of differences in wave exposure rather than genetics.

Habitat & Range
Net-of-cords kelp grows on rock in the low intertidal and shallow subtidal to 10 m deep. It is an uncommon species in BC, where it has been recorded in only a handful of isolated populations. Its range is patchy further south to California, where it is more common.

Similar Species
This species can appear similar to seersucker (Costaria costata), which has a single long narrow blade per stipe and holdfast. Seersucker has a similarly wrinkled blade, but the species can be differentiated from net-of-cords kelp by five longitudinal midribs, though these midribs may not be immediately obvious amidst the puckered blade texture.