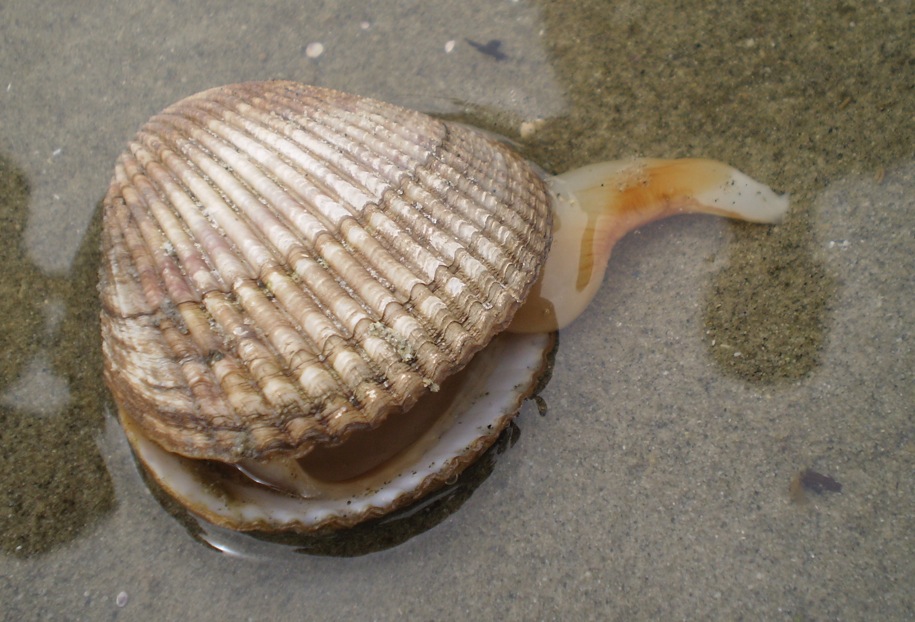 Identification
This species has a thick shell that is approximately as high as it is long (click here for information on shell orientation). It bears 34-38 strong, undulating ribs - the undulating quality of the ribs is visible in the bottom right photo. Nuttall's cockle reaches 14 cm in length and has a heart-shaped profile. The margins of the shell valves are marked by wavy lines (visible in the top photo). The shell is usually tan with some brown mottling or banding. The yellow-brown siphons are short, though they do show at the sediment surface.

Habitat & Range
This species is found buried just beneath the surface of fine sand-gravel sediment, often among eelgrass beds. It inhabits the intertidal and shallow subtidal of protected shores. It widespread and common but not usually present in high concentrations. Its range extends from Kamchatka across the Bering Sea to Alaska and south to southern California.

Similar Species
Most other cockle species are usually smaller and are either not as high as they are long, or have a section at the posterior end that is marked by strong ridges running perpendicular to the ribs. Similar cockles found in BC are the hairy cockle (Clinocardium ciliatum), the Aleutian cockle (C. californiense), and the low-rib cockle (C. blandum).

Human Uses
Nuttall's cockle is a traditional food source of coastal First Nations and is harvested by recreational diggers. It is not yet a target for commercial bivalve harvests as is tends to occur in concentrations too low to be profitable, however there have recently been investigations into its potential for aquaculture.