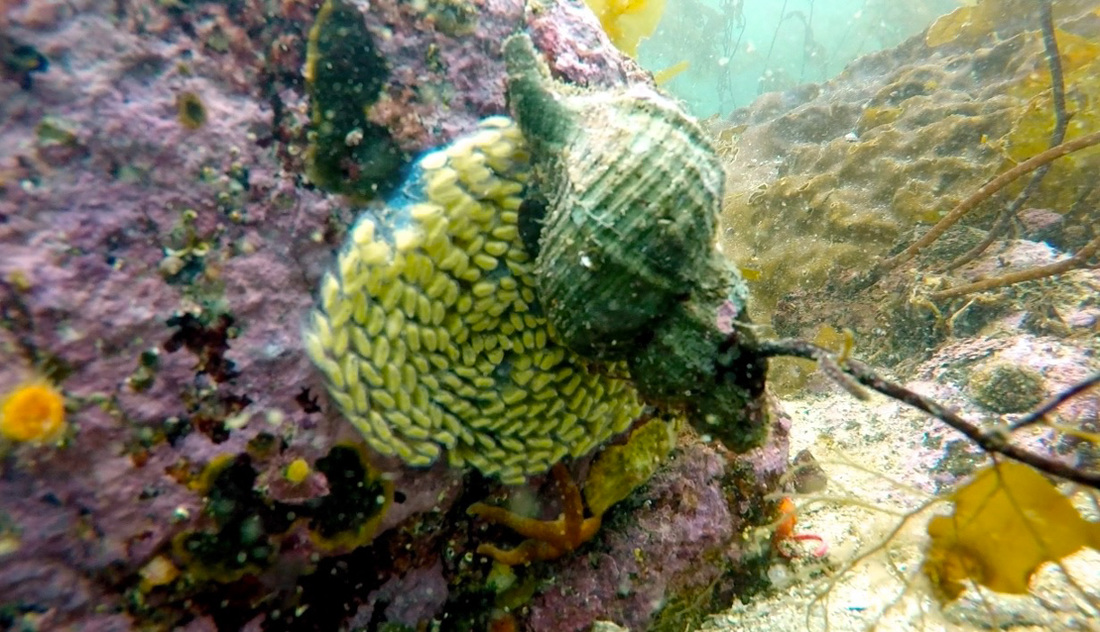 Top: an oregon triton laying eggs, and lacking the bristly periostracum. Photo by Jenn Burt. Bottom: an oregon triton with periostracum intact. Photos by Angeleen Olson. Note the checkered texture beneath the bristles in these images, and the long, open siphonal canal at the bottom of the aperture in the right-hand image. The brown operculum is also visible here.
Identification
​​The Oregon triton’s most distinctive feature is its hairy or bristly shell surface. These bristles are part of the shell’s greyish-brown periostracum. Beneath this bristly texture, the shell has approximately 6 whorls with spiral ridges crossed by axial riblets, forming a bumpy checker-like texture that may not be evident in more heavily-bristled individuals. The periostracum can be lost, however, so this texture is also a useful identification feature.​ The siphonal canal, which extends down from the aperture (shell opening), is about a third the length of the aperture and is open all the way. The shell reaches 15 cm long.

Habitat & Range
The Oregon triton inhabits the intertidal and subtidal to 90 m deep, and is more commonly found on rocky substrates. It is fairly common, and can be locally abundant. Its range extends from the Bering Sea to northern Mexico; it is also found on coastlines in Japan.

Similar Species
The checkered hairysnail (Trichotropsis cancellata), which reaches only 3 cm long, could be mistaken for a small Oregon triton as it also has a bristly periostracum. An easy distinguishing feature is its lack of a siphonal canal; instead the aperture is closed off at an angle.

The bristly periostracum prevents the shell from being colonized by barnacles and other encrusting organisms, as such colonizers quickly swoop in when the bristles are lost or removed.

This is the official state seashell of Oregon.