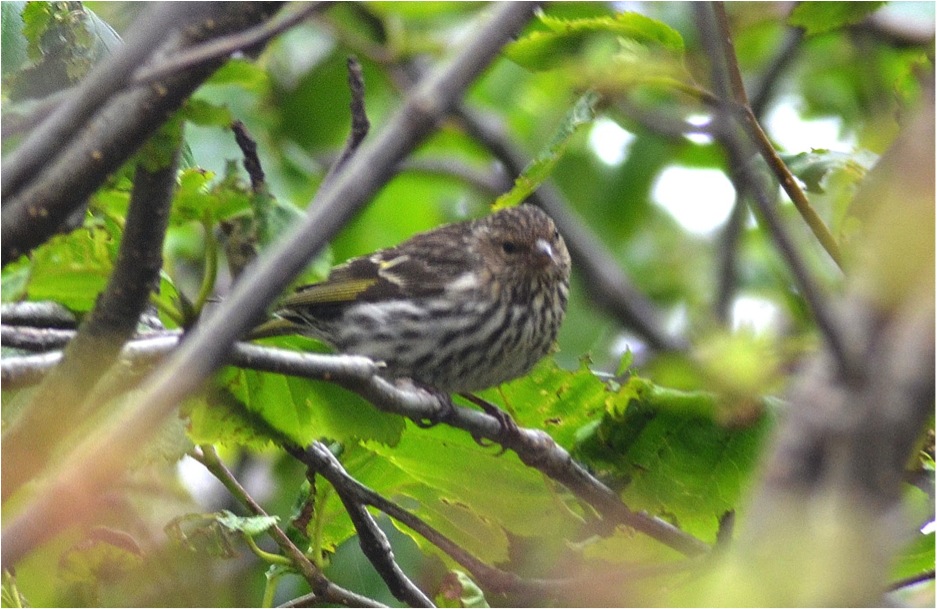 Photo by Christian Kelly
Identification
This small finch has a unique bill shape and distinct colouring that distinguishes it from similar birds. Its bill is thinner and more pointed than other finch bills, which tend to be fairly wide and blunt. It is brown overall with a lighter front and obvious streaking on both its front and back. Its wing and tail feathers are edged with yellow. The pine siskin is a relatively stocky bird, with a short forked tail and sharply pointed wings. Its song and call are wheezy. A flock of this species may be heard before it is seen, as individuals constantly tweet to each other even when flying. Click here to hear songs and calls.

Habitat & Range
The pine siskin is found throughout most of North America at some point during the year. Select areas are home to it year-round, including the BC coast, southern Canada, and some ares of the western United States. Its breeding range is mostly in western Canada, and it tends to overwinter in the eastern United States. This is a general rage, however, as this species is erratic in where it breeds and overwinters year-to-year. This gregarious species tends to flock to locations with seed crops.
In winter the pine siskin is commonly found in coniferous and mixed coniferous-deciduous forests. In summer it will also appear in shrub and field areas, though it  will branch out from its preferred habitat to feed wherever seeds are available.

Similar Species
The house finch is also brown and streaky, but is slimmer, has a wider bill, and is missing the yellow-tinged wings and tail. The northern extent of the house finch's rage just enters coastal and southern BC, so its presence on the Central Coast is less likely. Other finch species of similar colour and size either do not have yellow wings and/or are not streaked.

Intriguing Info
Pine siskins are very determined when on the hunt for seeds, and will even hang upside down to gain seed access. Pine siskin flocks may join up with goldfinch flocks in winter.
​
This species deals with cold night weather by increasing its metabolic rate by 40%; it can increase it to 500% for a period of hours at a time if necessary. It also increases its body fat, and builds very insulated nests.