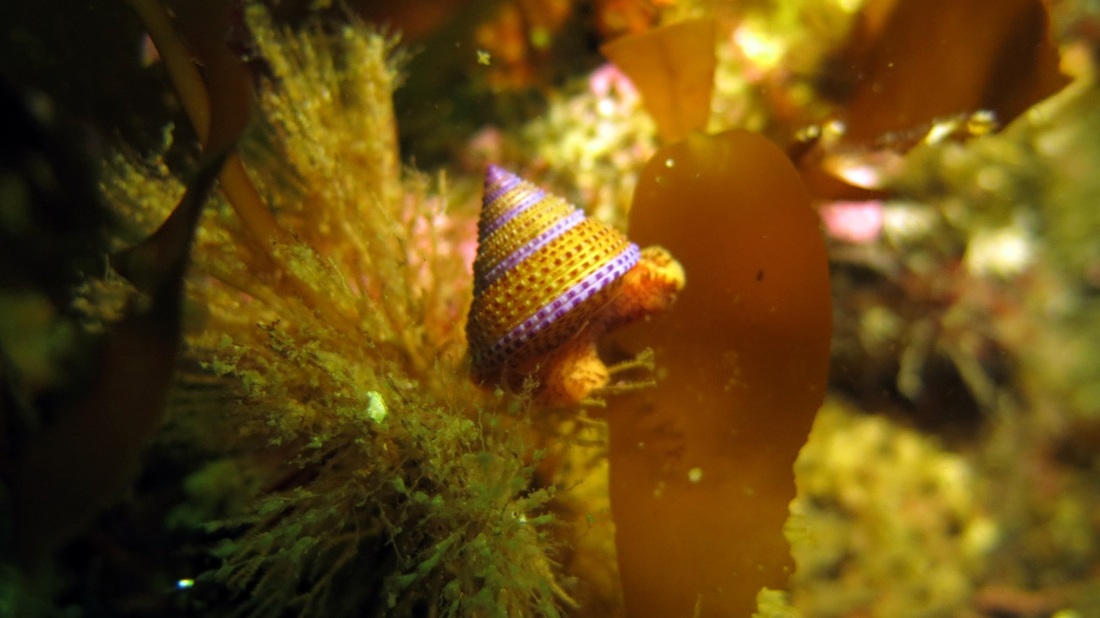 Photo by Jenn Burt
Identification
The colourful shell of the purple-ringed top snail can be up to 30 cm tall. Shells typically have 8-9 whorls, each with a bright purple band that contrasts starkly with the rest of the orange-yellow shell. The spiral ridges are beaded (bumpy), and the snail’s soft body is pinkish-orange.

Similar Species
The brilliant colouration of the purple-ringed top snail is unlike any other Central Coast snail species. However, similarly shaped species such as C. variegatum  and C. ligatum are distinguished by their lack of brilliant shell colour, and absence of beads on the spiral ridges (C. ligatum only).  The soft body of C. variegatum is cream coloured, and that of C. ligatum is orange.

Habitat and Range
This vibrant species inhabits kelp forests – specifically the mid-stipe region of the kelp. The purple-ringed top snail can also be found on rocky shores in the exposed intertidal zone, to depths of 42 m. It can be found nestled among hydroids, feeding on kelp, or feasting on a diversity of algae and animals in the intertidal zone. Its range extends from northern Alaska to northern Mexico.

This species feeds on kelp, encrusting diatoms, bryozoans, hydroids as well as detritus..