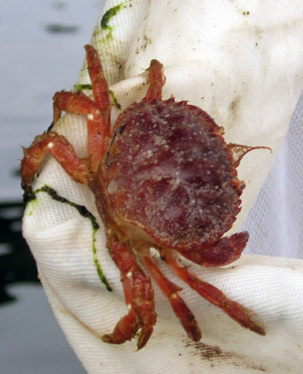 Photo by Helen McConnell
Identification
The carapace of this crab is almost circular, reaches 5 cm across, and is widest at the seventh or eight tooth after the eye. It is usually a dull brownish-red or reddish-orange, though sometimes individuals are mottled, striped, or even white. It has black claw tips and short hairy legs. The surface of the carapace may be covered in wart-like tubercles.

Habitat & Range
The pygmy rock crab tucks itself away in small holes and crevices in rocks, in giant barnacle shells, and under rocks in the low intertidal and subtidal to a depth of 400 m. Its range extends from northern Alaska (Pribilof Islands) to southern California (Palos Verdes).

Similar Species
The furrowed rock crab (Romaleon branneri) has spiny ridges on the movable finger of the claw, and is usually a mosaic of colours. Its carapace is less rounded as well.

Intriguing Info
This crab feeds on barnacles and other invertebrates, is mostly active at night, and uses its body to "plug" the opening to its shelter.