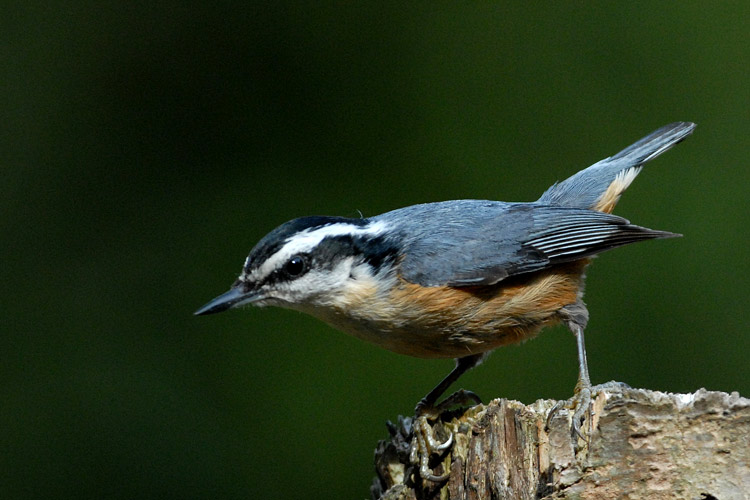 Photo by Mike Yip
Identification
This distinctive little bird is a striking combination of blueish-grey back, wings, and tail with rusty red undersides. Its black cap and eyeline, broken up by a white eyebrow, gives its head a striped appearance. Its tail and wings are short, further accentuating its small compact body. It has a quick, bouncy way of moving, whether in flight or moving in all directions — often upside down — along branches. Its song is a high-pitched, nasal yank-yank-yank.

Habitat & Range
This species prefers coniferous forests, particularly for nesting. It is often seen creeping along trunks and branches in search of insects, beetles, spiders, and other prey. It can be found year-round in the Pacific Northwest and across much of North America. This species can be a resident, a short distance migrant, or an irruptive migrant, and its winter range — which extends across the southern and eastern United States — varies year-to-year.

Similar Species
The similarly-shaped brown creeper (Certhia americana) is white below and mottled brown on top, and has a downcurved bill.

Intriguing Info
The red-breasted nuthatch excavates a nest in a in rotten log or snag. It lines the hole to the nest with pitch collected from nearby trees, possibly to keep out predators or competitors. The nuthatch flies straight into the hole in order to avoid getting stuck on the pitch.