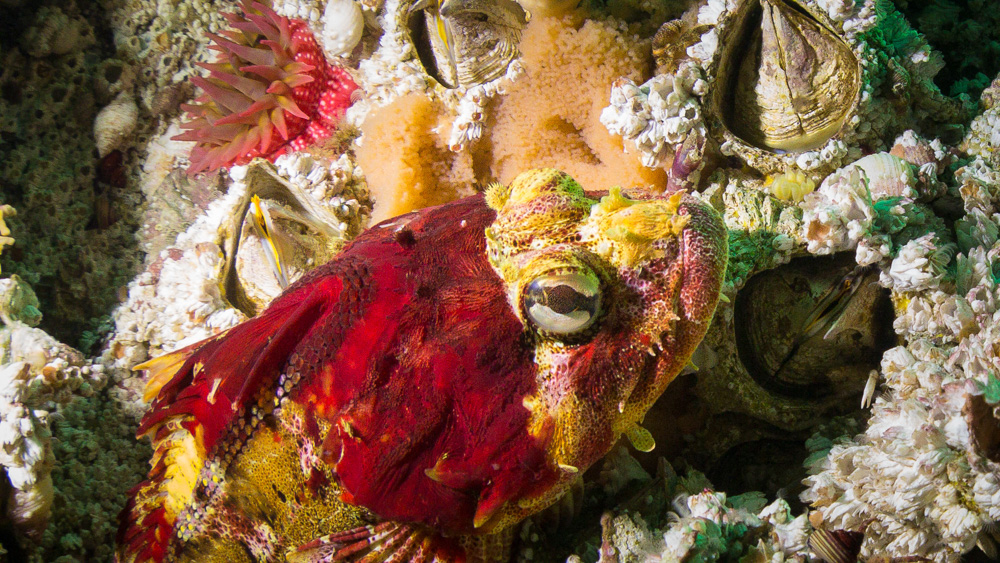 A red Irish lord amid barnacles and anemones. Note the stripe of scales looping around the dorsal fin. Photo by Grant Callegari. Bottom left photo by Tristan Blaine. Bottom right, of a juvenile, by Angeleen Olson.
Identification
This sculpin is often quite colourful, and though it is primarily red it can be mottled with various colours, including pinks, yellows, oranges, browns, and white. It is capable of changing its colours to match its surroundings. Key identifying features are its single dorsal fin divided into three steps by notches, the lack of fleshy flaps on its nostrils, and a defined stripe of scales around the dorsal fin and again below the lateral line (the section between is unscaled). This fish gets to 51 cm long.

Habitat & Range
The red Irish lord can be found in rocky habitats from the intertidal to depths of 275 m. It is more commonly found in shallow locations, where it camouflages itself among encrusting seaweeds, sponges, and other sea life (see photo at right). Juveniles often spend time in tidepools. Its range extends from Kamschatka, Russia east along the Commander and Aleutian Island to the Gulf of Alaska, and south to Monterey Bay, California.

Similar Species
The much less commonly observed brown Irish lord (Hemilepidotus spinosus) has a wider band under the dorsal fin: its band is 6-8 scales wide, whereas the red Irish lord's is 4-5 scales wide. Its colouring is less variable, and is mottled brown with red tinges.

Human Use
The red Irish lord is by no means a target species for fisheries — when caught by commercial operations they are discarded — but are occasionally caught (and kept) by some sport fishermen. FishBase reports it as "good eating."