*translates to "blue thing with a sail" 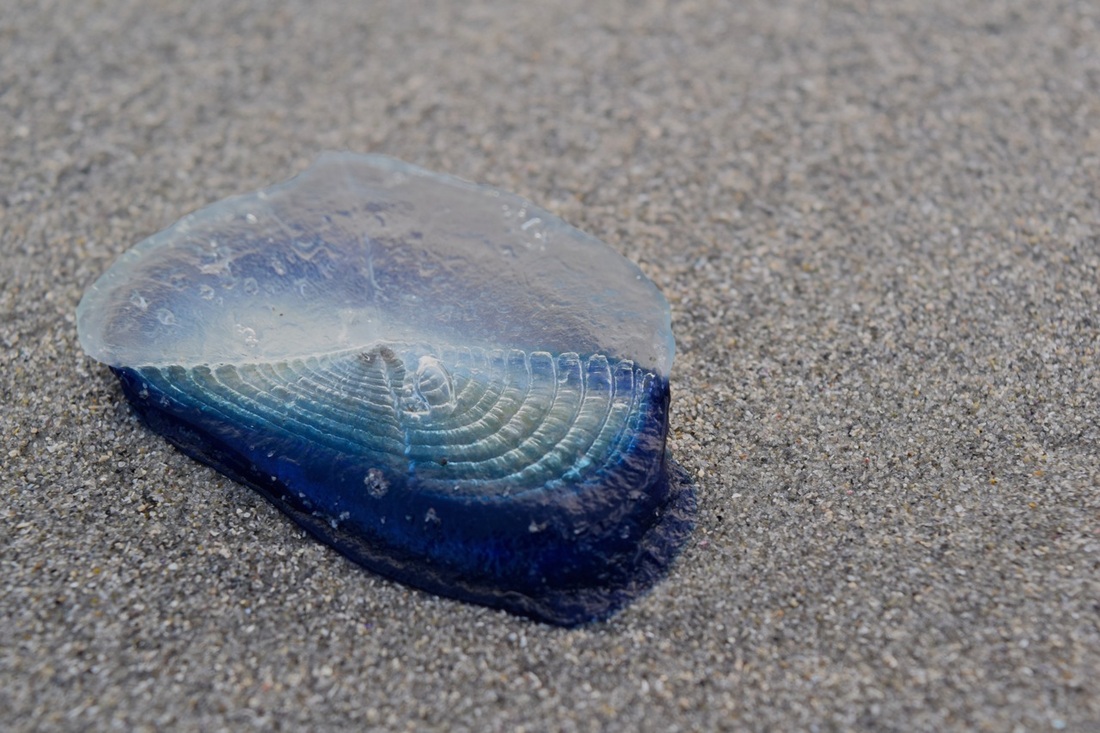 Top and right: sail jellyfish washed up on a Calvert Island beach. Photos by Francine Beaujot. Middle left: a large number of sail jellyfish at sea near Calvert Island. Photo by Margot Hessing-Lewis. Bottom left: sail jellyfish scattered across the surface and lit up by the sun. Photo taken in Barkley Sound by Dennis Morgan. Scroll to the bottom of the page - and visit this Island Nature article - for more photos of this beautiful cnidarian.
Identification
This distinctive jellyfish has the general appearance of a miniature surfboard topped with a sail, and is translucent with a blue-tinged base. Small tentacles attach to the underside of the base. It is usually 4-6 cm wide, but can be up to 8 cm. It is not actually a true jellyfish (Class Scyphozoa), but rather a hydroid (Class Hydrozoa). Sail jellyfish were once thought to be a colony of hydroids, though recent evidence indicates that each individual is a single large hydroid, similar to an upside-down anemone attached to a floating base. Very small medusae (3 mm maximum) bud off the hydroid form. See the Jellies Zone species page for more information on sail jellyfish biology.

Habitat & Range
Sail jellyfish float on the surface of open ocean. They are usually found offshore, but as they are at the mercy of the winds and currents they are occasionally blown closer to shore. Particularly strong onshore winds may result in masses of sail jellyfish washing up on beaches, where they die within a couple of hours if the tides don't pull them back into water. These events usually occur in late spring and early summer, though in July and August 2014 large numbers were reported along the Pacific coast of North America, including the BC coast. Sail jellyfish are found in tropical and temperate waters throughout the world.

Intriguing Info
Large numbers of this species were reported during the 1926 tropical and 1940 extratropical El niño events, from Cape Mendocino to Hecate Straight and off Haida Gwaii respectively.

The sail is made of a somewhat rigid, chitinous material, while the blue-tinged base contains air-filled chambers that allow the animal to float on the water's surface. Sails are not oriented directly length-wise along the float; instead they are angled either left or right. One population will consist of both types of individuals. This mirror-image orientation directs the two forms in opposite directions in the same wind.

The small tentacles are used to capture prey, such as small fish, invertebrate eggs, and crustaceans. Predators are few, and include the sunfish (Mola mola). Though sail jellyfish are not harmful to humans, handling live or beached individuals or touching your eyes after handling them may cause some irritation.