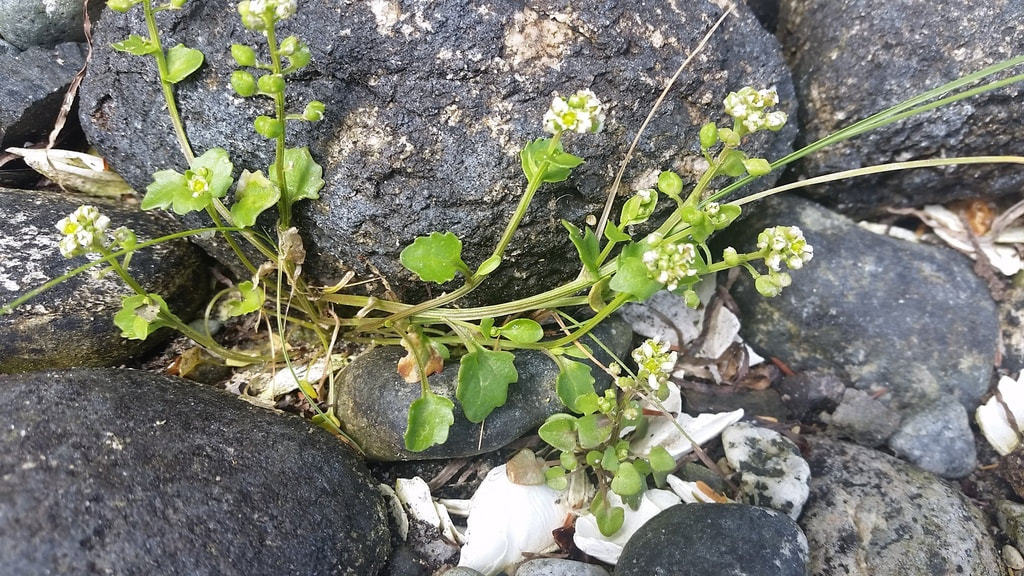 Scurvy grass growing in the the intertidal. Photo by Kristen and James Miskelly.
Habitat & Range
Scurvy grass is a seashore plant commonly found along moist sandy shorelines, mudflats, and tidal marshes, at low elevations. Its range stretches from coastal Washington in the south through coastal BC to Alaska, the Yukon Territory, and Northwest Territories. It is also found throughout Eurasia.

Similar Species
There are many subspecies or species of the genus Cochlearia that fall under the name scurvy grass, and the physical characteristics of scurvy grass differ in response to different environmental stresses, which can make differentiation between different subspecies difficult. There also is some confusion about synonymous latin names for this species: the Illustrated Flora of British Columbia, published by the BC Ministry of Environment, lists it as C. groenlandica with C. officinalis ssp. oblongifolia as an alternative. E-Flora lists another 6 options. Luckily there is only once native Cochlearia species found in BC, so this naming and subspecies confusion should have no bearing on identification —  in BC the names Cochlearia and scurvy grass will only refer to this one species.

Human Uses
Scurvy grass is edible, and received its name from the early Arctic explorers who packed dried scurvy grass to eat in the winter because it is rich in vitamin C. This one plant tended to make the difference between life and death from malnutrition exacerbated by scurvy. Sailors in other cultures, such as the British Navy in the 1700's, also used scurvy grass to the same effect.

While scurvy grass is indeed edible, there are different accounts as to its palatability. Some say it is quite bitter, while others say it is very tasty and makes delicious salads and sandwiches.

Intriguing Info
Danish scurvy grass (Cochlearia danica), a relative of C. officinalis, has begun to spread inland in Britain to the sides of salted roads. The salt, used to deal with icy conditions, causes most other plants to die off, and therefore clears the path for Danish scurvy grass to swoop in and take over.