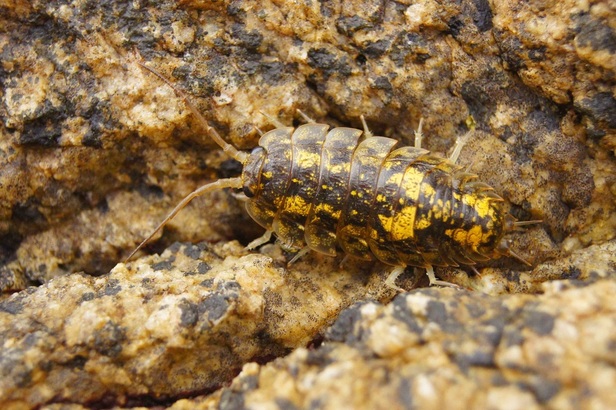 Identification
This small crustacean looks like a flattened version of the familiar common pill bug, with the addition of paired uropods at its posterior end. It is grey, sometimes slightly mottled with lighter markings, and reaches 3.5 cm long.

Habitat & Range
The sea slater, a nocturnal creature, stays hidden in rock crevices and caves during the daytime. It usually lives 1-2 m above the high tide line on rocky shores, though may move further away from the splash zone if necessary. At night it emerges to scavange on dead plant and animal material in the high intertidal. Its range extends from the Aleutian Islands to central California (Santa Cruz).

Similar Species
The California sea slater (Ligia occidentalis), originally only documented in California, has appeared in some locations in southern British Columbia. It is smaller and has longer uropods.

Intriguing Info
The sea slater breathes air, and will drown if trapped in water. However it is also subject to desiccation and requires moist gills to breathe. It solves this problem by dipping its uropods in puddles of water.