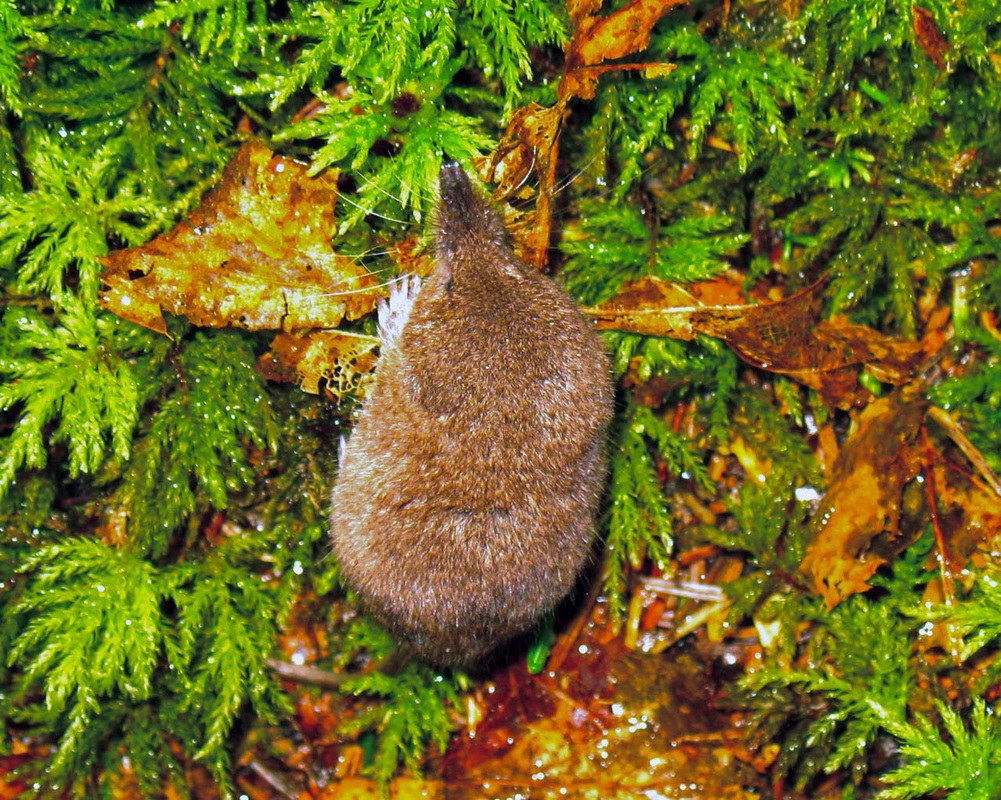 Sorex sp., likely a dusky shrew, on Calvert Island. Photo by Julia Fisher
Identification
The shrew species present on the Central Coast are the common shrew (Sorex cinereus), the dusky shrew (S. monticolus), and the common water shrew (S. palustris). A definitive shrew ID requires close examination of teeth. The photo above likely shows a dusky shrew; this is based on location, as the dusky shrew is the only documented Sorex species on Calvert Island. It is a medium-sized shrew (average total length about 12 cm) with a greyish or brown to almost black back and lighter grey to brown undersides. The tail is only faintly bicoloured (darker on top, lighter on bottom). Like other shrews it has a long narrow snout, small ears, tiny eyes, and short fur.

Habitat & Range
The dusky shrew is a common species found in a variety of moist habitats throughout BC, including on Haida Gwaii and Vancouver Island. It is found in forests and unforested locations, including disturbed areas. Its Pacific Northwest range stretches north to Alaska, south to northern Oregon; it also stretches east into interior regions of North America, where it is found as far south as Mexico (range map).

Similar Species
The dusky shrew and the common water shrew have similar teeth (the third unicuspid teeth are smaller than the fourth), but the common water shrew tends to be larger (average total length about 15 cm long), has dark grey or black fur on top and silvery-grey underneath, a distinctly bicoloured tail (dark above, light grey or white below), and a fringe of stiff hairs on each hind foot. The common water shrew is documented on the mainland of the Central Coast but not on coastal islands other than Vancouver Island.
The common shrew is smaller (average total length about 10 cm). Its third unicuspid tooth is equal to or larger than the fourth, it has a distinctly bicoloured tail, and it is found on the mainland and a few coastal islands. See Nagorsen (2002) for more information on shrew identification.