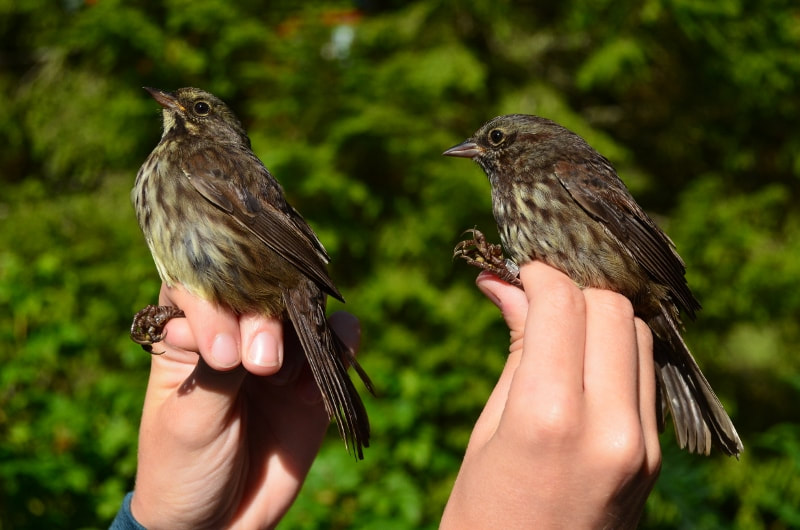 The song sparrow's song is described as a "stuttering, clattering sound." The song also varies from region to region. Click here to listen to examples of songs and alarm calls, or hear the song in the video above.​

Habitat & Range
The song sparrow is frequently found in open habitats — including backyards — as well as along forest edges, near wet areas like marshes, and hopping around low-lying vegetation. Males can be quite conspicuous as they sing from branches, especially in spring and summer. This bird can be found on the Central Coast throughout the year: its year-round range stretches along most of the west coast, and extends into parts of the United States. It is found across much of Canada and some northern states during summer breeding months, and it winters in the southern US.

Similar Species
The dark spot sometimes found on the streaked breast of a song sparrow is also found on some other sparrow so should not be used as a major ID feature. Sparrows with similar colouring are the vesper sparrow (which has a white eyering), the savannah sparrow (yellow-tinged around the eyes), Lincoln's sparrow (darker eye stripes and buff-coloured throat stripes), and the fox sparrow (larger, darker, and redder overall). Click here for a detailed description of differences between these species.

Intriguing Info
There are 24 recognized song sparrow subspecies. The darker plumage found in areas like the Central Coast is caused by an increase in the pigment melanin, and may be a defense against mites and other such things that can cause decay in wet environments. Melanin makes the feathers tougher and more durable against degradation.